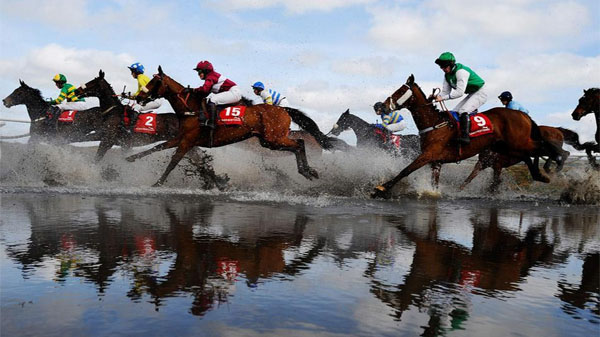 In any one day, let alone a week, so many amazing and breathtaking things happen throughout the world. Sometimes, on a Monday especially, it is easy to forget this, to get caught in the drudgery of day to day living and lose sight of what exists beyond the office walls or canteen windows. So, with that in mind, I bring you a small reminder of the world that exists regardless of the confines of our own, individual worlds, through the medium of image. From futuristic bionic prosthetics to the ancient tradition of horse racing, This Week’s Greatest Moments in Photos will inspire even the most gloomy of Monday mourners.

Supermarket Booths have been forced to remove bags of Whole Hearted Roasted Monkey Nuts from its shelves, as the packaging did not have a peanut allergy warning. Booths Company have had to advise that customers with an allergy to peanuts should not eat the nuts and return the bags to their nearest Booths store for a refund. Turns out Booth takes labelling very seriously. Who knew they contained nuts!

Turns out Bieber might not be as innocent as he makes out to be! Swedish police say they have found drugs on board a tour bus by Canadian pop singer Justin Bieber. Touring in Stockholm while performing on Wednesday police have said to have found a small amount of drugs and stun gun when officers raided the empty bus parked under the Globen concert venue. He declined to identify the drug saying “it was sent to a laboratory for an analysis”. No arrests have been made but it has been lead to further investigation. Not so welcomed when entering Europe it seems!

So, it would seem China has wowed the world with yet another of its ‘innovative’ people controlling methods – this time the country is being criticized for locking up beggars and homeless people when there is any type of celebration or event going on. Designed to minimize the inconvenience and awkwardness to tourists and the like, this seems a particularly inhumane practice, even for China.

Just when Technology couldn’t get any more exciting Budweiser has swooped in with their great “Buddy Cup” which involves a beer glass that connects to Facebook via a built in chip. Created by Agencia Africa in Partnership with Bolha, the creation works by instantly making people friends on Facebook when they toast using the beer glass. The new creation aims to enhance brand activation and increase the interaction between Budweiser consumers attending the brand’s sponsored parties, concerts and festivals. Cheers to making friends!