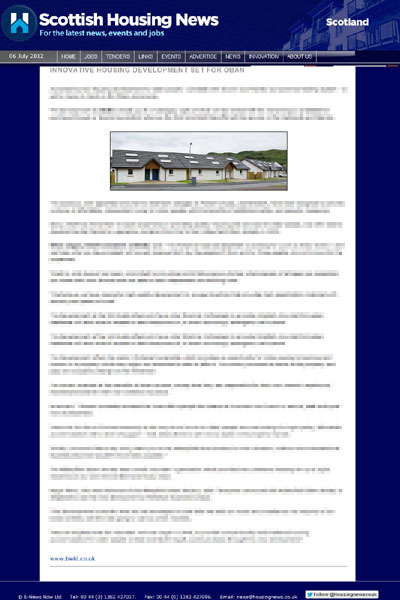 Bield has introduced a new housing development for older people in Oban that has its own sun-powered heating system. Eight of the 14 cottages will be rented and the further six available for purchase in a ‘shared-ownership’ scheme.

The McKelvie Road development in Glenshellach provides affordable, independent living for older people, thanks to a generous donation by  the former Abbeyfield Oban Society in 2008.

Brain Logan, Chief Executive at Bield, said: “The McKelvie Road development is exciting for us on so many levels – and we hope what we have created will be well received both by the people of Oban and by those people who will move into the properties.”

This is Bield’s first scheme to include solar thermal roof panels that provide constant hot water. The development also has access to the smart technology emergency call system, Bield Response 24.

The development includes the option for the owner to purchase a share of the property and for the remainder pay an occupancy charge. Whilst having all the same benefits as other tenants, owners will be responsible for their own maintenance and contents insurance.

Brian said, “We think this form of home ownership is the way of the future for older people who are looking for high quality, affordable accommodation with a level of support – that allows them to still have a stake in the property market.”

Brian also extended his thanks to the Abbeyfield Oban Society, a small volunteer society that provided sheltered housing on Glenmore Road, Oban, for their donation.

Roger Parry, who had been chairman of the Abbeyfield Oban Society, said: “The development is exactly what we had envisaged in 2008 after we sold our house and transferred the majority of our funds to Bield, with the rest going to various other charities.”

This coverage can be viewed in full on the Scottish Housing News website and was achieved as part of the ongoing PR campaign by the Holyrood PR on behalf of Bield.