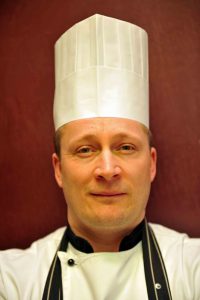 One of ScotlandÕs most unusual venues has embraced the Chinese Year of the Snake by planting a host of Far Eastern treats which will be served up to diners.
Ben Harrison, head chef at the award-winning Gateway Restaurant at the Royal Botanic Garden Edinburgh (RBGE), has easy access to unusual fresh fruit, veg and herbs from all around the world which are grown on the site.
Now he has put his head together with Ben Dell, community gardener with the Edible Garden Project at RBGE – and theyÕve marked the biggest date in the Chinese calendar by sowing a crop of tasty Oriental goodies, including pak choi, chop suey edible chrysanthemum, wong bok Chinese cabbage, Tastsoi, Mizuna and Mibuna.
Chef Ben works for Sodexo Prestige, part of a 40-stong team which runs the restaurant and two cafes at the site and also caters for hundreds of weddings, conferences and other events at the historic Garden.