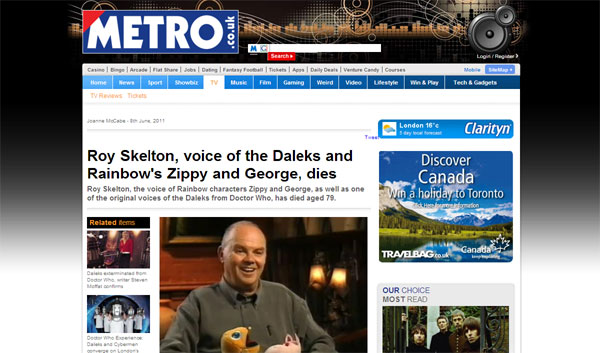 Our links need you….please feel free to comment on any of today’s links on our Facebook and Twitter pages and as always if you have any links that you think we may like why not put forwrad your suggestions and we will give them an outing.

DON’T TOUCH THE PAINTING – JUST SPRAY IT WITH BACTERIA  (Pamela)

A team of researchers have started experimenting with a new technique to clean the world’s most iconic works of art using bacteria.  The team of scientists from Polytechnic University in Valencia, Spain discovered that they could clean paintings and other pieces using a non toxic micro-organism.   First to receive for the ground-breaking new treatment is the Frescoes of Antonio Palomo from the 17th century in the Church of Santos Juanes in Valencia.  Let’s hope it’s as good as they say it is.

UP ABOVE THE STREETS AND HOUSES FOR RAINBOW’S ROY  (Adrian)

It’s a sad day for anyone old enough to remember late 70s and 80s children’s TV following the news that Roy Skelton – the man behind the voices of Rainbow’s Zippy and Bungle – has passed away at the age of 71. A legend off camera, Skelton’s voices were some of the seminal childhood memories for most 30-somethings in Britain. And his work as a voice artist in Doctor Who endeared him to millions more viewers – most of whom were too scared to emerge from behind the sofa when the Daleks, who he provided the voices for, came on screen. RIP Roy. A true legend of kids TV.

A Las Vegas performer has broken a world record for the most numbers of body piercings in one sitting an eye watering 3,200! Now that may sound painful to some but Staysha Randalls was determined to beat the previous record which stood at 3,100 piercings in one go. Helped by her friends at Inktoxicated tattoos she completed the record but it wasn’t as easy as she thought as these pictures show her unsuccessfully holding back the tears. One question on my lips is that with the majority of piercings done on her back – just how will she sleep at night, its got to be about as comfortable as sleeping on a bed of nails surely?

THE ‘NEXT’ GENERATION OF MODELLING (Emily)

What do you imagine when you hear the word “model?” Slim? Long legs? Striking features? Or do you imagine an average Joe with average looks? For many people modelling is something that they can only dream about – for Roland Bunce, 24, it could very possibly become a reality. Roland, the “chubby-faced” contestant is a computer scientist from Belfast in with a chance of winning high street store Nexts modelling competition all with the help of social networking site Facebook. Fans on Facebook are urging the public to vote for Roland and keep him in his current comfortable position of number one. If Roland wins he will receive a £2,000 shopping spree at Next, the chance to star in a photo-shoot  for Next and a special introduction to leading model agency, Storm. If the infamous ‘Rage Against the Machine versus Joe McElderry’ campaign is anything to go by then I think it’s safe to say that Roland really is in with a chance.

COULD OLD-FASHIONED ‘LINES’ BE THE PUNISHMENT FOR TWITTER DEFAMATION? (Scott)

When blogger Fahmi Fadzil, 30, vented on Twitter and accused his pregnant girlfriend’s employer of treating her badly, he couldn’t have imagined the consequences. Magazine publisher Blue Inc threatened to take a defamation case through court. However, they eventually settled out of court, when Fahmi agreed to Tweet out a detailed apology – 100 times. The individually numbered apologies where spaced out over a three-day period – generating massive, worldwide publicity (http://bit.ly/kgWVHf). You decide if the company’s decision was wise.