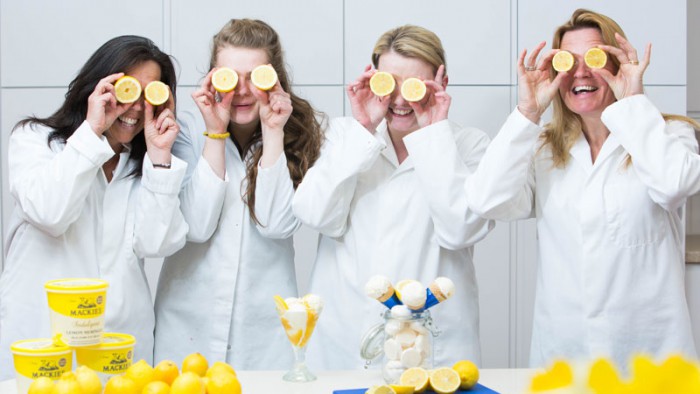 ICE cream specialists Mackie’s of Scotland are  making treat lovers an offer they can’t refuse – with the launch of a new Sicilian flavour for the summer.

The firm has taken inspiration from the sun-kissed Italian island, bringing an early taste of summer to Scottish customers with its new  Sicilian Lemon & Meringue flavour.

Kirstin Mackie from the family firm said: “As well as being famous as the birthplace of the Mafia, Sicily also produces some of the finest lemons available. They are bursting with refreshing flavour which is perfect for a summer ice cream.

“There’s a saying in Sicily that lemons are not real lemons unless they’re Sicilian, which probably explains why nine out of 10 lemons in Italy come from the island. While they are smaller than some other types, they really pack a punch.

“This is our 30th anniversary year, so we wanted to create something really special to mark the occasion and we believe this ice cream more than delivers.

“Scientists have even established that citrus fragrances – particularly the smell from lemons – stimulates the part of the human brain that makes us feel good and boosts positive moods. Certainly anyone trying this ice cream is likely to feel instantly happy.”

Development director Kirstin helps run the family-owned business with her brother and sister. Early inspiration for the new flavour came when she attended the world famous ice cream expo in Rimini. 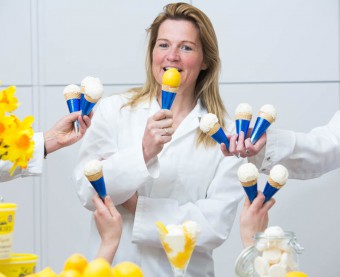 The  firm is now working with an Italian supplier to get authentic ingredients for the creamy lemon flavoured ice cream, which is rippled with a lemon curd sauce and sprinkled with lemon meringue pieces.

As an added bonus for fans of the frozen treats, Mackie’s of Scotland will also be launching a second new flavour with flavours sourced closer to home  – Scottish Tablet, a tablet flavoured ice cream with Scottish tablet pieces.

Kirstin added: “This is an ice cream guaranteed to satisfy a sweet tooth and once again our development kitchen team excelled, sourcing the perfect consistency and size of tablet pieces.

It  is the first time the firm has launched a limited edition, seasonal flavour. Sicilian Lemon will be replaced in autumn by a chocolat and orange flavour, made with chocolate orange pearls, fresh milk and cream and using Mackie’s of Scotland’s own chocolate.

Tesco will be the first retail giant to rollout the latest flavours Scotland-wide from Monday, April 25, marking the latest chapter in the onging success story of Mackie’s of Scotland, an £11.5m-a-year business which employs 66 people.

Kirstin along with sister Karin and brother Mac are the fourth generation of the Mackie family to be involved in the family business, based at Westertown Farm, Aberdeenshire and renowned for having  its own dairy herd as well as four wind turbines and a huge solar farm, vital elements in the firm’s “sky to scoop” ethos. 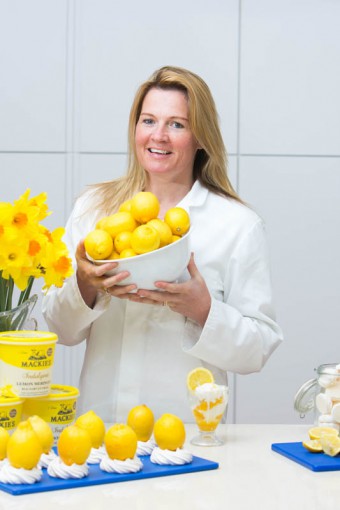 The rise of the Mackie’s name as one of Scotland’s most recognisable food brands started in 1986 when the company responded to changes in the dairy market by launching ice cream production.

In 2009, the company diversified into making potato crisps in a joint venture with the Taylor family, which continues at new premises in Errol Brickworks as Mackie’s at Taypack. Then in

In 2014, Mackie’s launched its own range of chocolate bars. Production is now moving to a purpose-built, £600,000 chocolate factory on the farm.

The company is on course to sell £1million of chocolate over the coming year and and expanding range will further contribute to a burgeoning export book which already sees Mackie’s products on sale in global markets as diverse as Taiwan, South Korea and the Middle East

Recent investment in the business – including creation of the chocolate factory and the opening of Scotland’s biggest solar farm – has topped £6m with  attention on product development, infrastructure, innovation, staff and renewables to work towards growing turnover to £20m by 2020.

Find out more about the family business, which is a leader in the finest  indulgent snacks and treats, at http://www.mackies.co.uk/

To find out how we can achieve results like this for you call us on 0131 561 2244 or fill in the contact form below and we will get back to you.