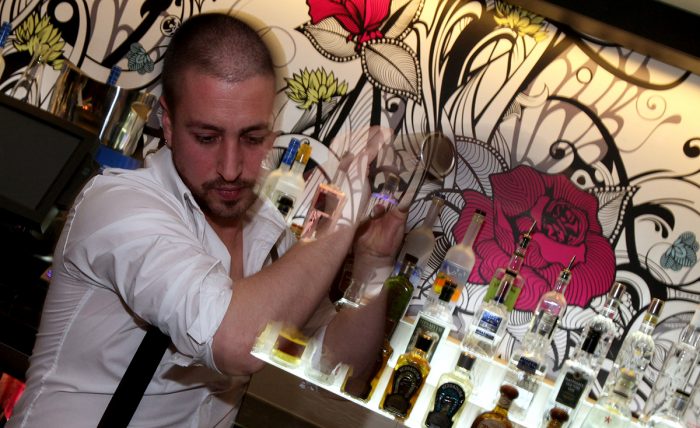 THE HOTTEST new style bar in Scotland’s capital city opened in November, with a successful launch night which was captured by the Holyrood PR video team.

The video contains an interview with owner of the bar, Rory McWhirter, who explains that people who have visted the venue so far have been thrilled by the design. He also says many guests enthuse about how it is so different from other pubs and bars in the area. Watch the full video below, which was produced by the expert PR video team at food and drink public relations agency, Holryood PR.

Hyde Out has taken a fresh approach to quality and style as well as its attention to the finer details, all of which comes across in the video interview.

Some of the details that guest can look fporward too include distinctive Timorous Beasties-designed wall covering that stylishly showcases an ‘upside down’ Edinburgh; a bespoke chandelier made from 600 crystal cut champagne and wine glasses by designer John Harrington; as well as an exclusive cocktail and food menu.

The cocktail list has been specdially created by Yan Macpherson and consits of traditional techniques and old school quality ingredients, that can be served long and sipped over time.

And the food offering doesn’t dissapoint either, designed to be dramatic and theatrical, it offers a range of dishes that include sharing platters, hot stone plates and 70’s style kitsch cheese fondues – perfect for sharing.

Rory McWhirter adds in the video: “Everyone involved with Hyde Out are young, fresh, keen and enthusiastic and we are all keen to push the boundaries with our offering to create something fantastically new rather than just another style bar.”

Hyde Out can be found in Edinburgh Quay near the city’s Fountainbridge area.

This final video forms part of a series of weekly video blogs which were designed to showcase the bars progress, engaging with the bars social media followers and providing a talking point in the media.

Previous weekly videos were a popular feature of  Hyde Out’s facebook page and were created as part of a sustained PR and social media campaign carried out by pub and restaurant PR agency, Holyrood PR in Edinburgh.

Have you considered the power of affordable business video as part of your food and drink PR campaign?

We can help your pub, restaurant, hotel or hospitality business to achieve the most powerful possible profile.

Cost effective video is just one of the cost effective services we offer as part of our pub and restaurant PR division.

Get in touch with us for a free consultation on 0131 561 2244 or fill out the simple form below and we’ll get straight back to you: