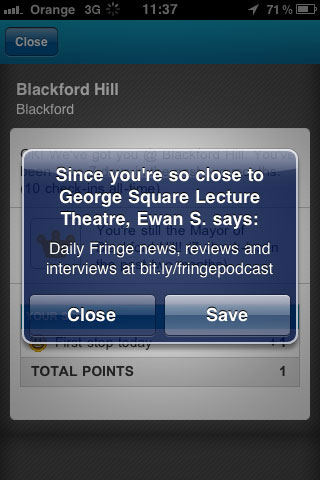 After the buzz in social media circles, I started using the main location based social networking tools. There have been times in the intervening weeks and months when I wondered why I bothered.

If you are in business you may well feel the same. If you’re already bemused about the “point” of Twitter or Facebook and how they can help your enterprise, you’re almost certainly going to be doubtful about the value of location services like Foursquare and Gowalla.

I’d urge you park your perfectly understandable scepticism for five minutes and read on.

There are no experts in this.  It takes half an hour to learn these tools and you’ll be on a level playing field with other users – and may be considerably ahead of your opposition.  Here’s the basic guide:

You’ll need a smart phone and first have to download the free Foursquare (or Gowalla) Apps from the iTunes store or the Android or Blackberry equivalent.  I prefer the look and feel of Gowalla, but Foursquare is where most of the activity is, so I’ll concentrate on that.

When you arrive somewhere (a pub, a park, a physiotherapist – literally anywhere), you use your smart phone to “check in”.  It’s relatively simple and quick after the first couple of times.  If the place doesn’t already exist, you can add it, simply by typing in the name. Global positioning satellites do the rest.

Until now I’ve checked in at the office, the pub (when I remember), occasional restaurants, supermarkets and even at my favourite barber shop. Most of all, I check in at various hills, parks and beauty spots while walking the dog.

If I’m honest there were times it felt futile. Where the location was a business (rather than a field) the owners and staff were oblivious.  The shared tips were few and far between. Outside of a relatively small number of social media anoraks, barely anybody was using these services.

At the weekend that all changed. Suddenly messages started popping up which made Foursquare seem useful and relevant.

As I checked in at various places, up popped a host of useful tips about businesses in Edinburgh – along with compelling reasons why I should use them. For instance:

Previously the problem was that “checking in” didn’t offer rewards apart from the possibility of winning a virtual badge or being named “Mayor” of a venue.

Now there is a real possibility that if I go to the barber, I might find out about nearby cafe that does a brilliant cooked breakfast; or a trip to the supermarket, might yield information about a two-for-one offer on beers (or a better offer at a nearby rival).

You don’t even have to check in. Simply stand on the street and check the ‘tips’ gives insider advice on nearby  places to eat or drink, or other things to do or see.  So what’s in it for business?

First of all, the stark reminder that you customers are sharing their thoughts on your service and your standards. They are sharing them while sitting at your tables, browsing your shelves or speaking to your receptionist.

Other potential customers are reading those thoughts while deciding whether to give you a whirl – not from their PC at home or in the office, but on their phone while standing at your front door.

Rather than seeing Foursquare as a threat, how brilliant could it be to promote what you offer? That was the approach taken by GAP in the US with a clever campaign offering 25% discounts for one day only to anyone checking into its stores using Foursquare.

Could you offer discounts, vouchers, two for ones, free checks or other benefits for Foursquare users? If you are a pub or restaurant, what are you doing for your “Mayor” to encourage that person to keep spreading the message about what a great venue you are?

But ponder this. Facebook doesn’t lack scale, reach … or credibility. It is also throwing its might behind location-based services, with the US launch in the past month of Facebook Places.

The launch may have been underwhelming; the reaction may have been lukewarm; there have even been the usual Facebook privacy issues. However, it isn’t going away.

It will be coming to the UK and it will likely make location services mainstream.  Which means in business terms there are only two places to be: on the grid, or off it.