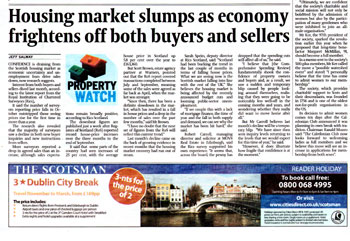 The Capital’s top property solicitor has received a PR in Scotland boost after being featured in a leading daily newspaper.

Warners was featured in The Scotsman, which reported on its latest property analysis about the state of the proeprty market in Edinburgh.

Estate agency partner Scott Brown told the paper that recent optimistic stats by organisations including the Registers of Scotland were providing a misleading picture of the property market. He said that in reality the market was remaining flat and the number of house sales had dwindled.

The coverage can be viewed on the Scotsman website and was the result of a sustained PR in Scotland campaign by the Holyrood PR.