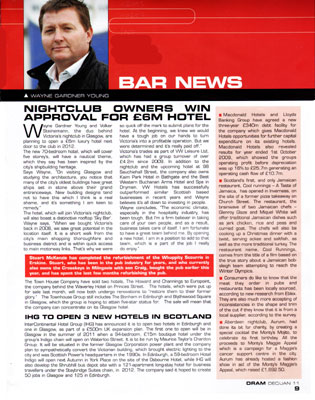 An article detailing the approval of plans to open a £6 million hotel in Glasgow has been featured in a hospitality trade magazine.

The DRAM – Scotland’s leading licensed trade magazine – ran the piece which explains the ins and outs of the proposal.

Wayne Gardner-Young has successful gained permission to transform a building on Sauchiehall Street, Glasgow, into a 70-room, five-storey high hotel.

The Scottish entreprenuer – who also owns Victoria’s nightclub located next door to the new site – aims to give the hotel a nautical theme.

Wayne is quoted in the piece, explaining the “great potential” in the location and reasoning behind the move.

The businessman has also been granted planning approval for a £22million eco friendly theme park in West Lothian, with work scheduled to begin early next year and opening in Easter 2013.

The coverage was secured in The DRAM magazine and was secured as part of a sustained PR and social media campaign carried out by the Holyrood PR.