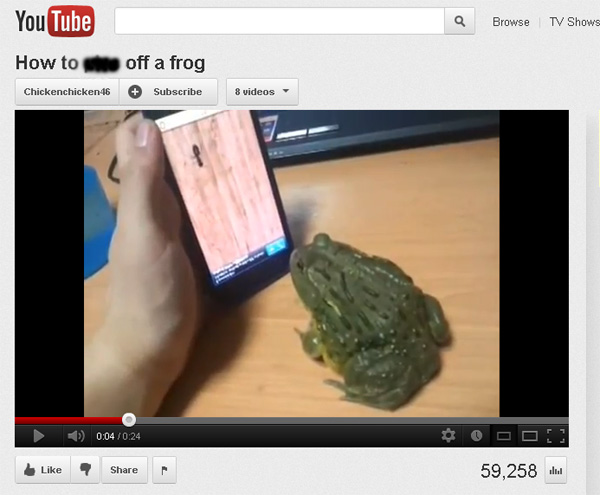 I’m not sure what kind of person keeps a warty frog as a pet. How exactly do you keep it occupied when not kissing it in the hope it turns into a glamorous prince or princess? Thankfully the advent of smart phone games like Ant Squash means amphibian-lovers can enjoy hours of endless fun with their slimy-feeling friends. They just have to be careful it doesn’t end with unintentionally hilarious consequences as it did in this case. Enought to brighten any Monday morning.

It would appear I am not alone in wondering what exactly it is that made and maintains Kim Kardashian’s fame. I appreciate she has a reality show (although I have never watched it) and a sex tape (that will never top my ‘to view’ list) but, like Emma Brockes points out in a Guardian interview with the star, this doesn’t seem to explain her astronomical presence in the public eye. And, although I would like to say this interview is illuminating – allowing me to understand the hype and near-obsession with this beautiful woman, I cannot. As far as I can gather she is famous for being of above-average looks, dating a music star and allowing herself and her family to be emotionally exploited on television. But Kim seems to see no irony or source of confusion in her success. The best part of the interview has to be when she compares herself to an 18 year old cancer sufferer – saying that her experience of deciding to get married on TV “taught her a big lesson on who her friends are and so much about life” just like his young girl. While I can only hope she keeps such pearls of wisdom to herself in future (at the risk of losing my last shred of faith in humanity) there is no denying that Kim Kardashian, love her or hate her, is here to stay.

A PICTURE IS WORTH A THOUSAND WORDS (Lisa)

As the old cliché states ‘a picture is worth a thousand words,’ and we here at the Holyrood PR are great advocates of this. If you have a look through our HP Sauce blog you will be hard pushed to find any update without an accompanying image. We are often having brainstorms to come up with ideas for creative photocalls in order to capture an exciting image that will help sell any story we issue. I recently came across this site that lists the top 50 photographers in the world and I could literally spend hours looking through the various portfolios. The images are captivating and I’m sure you’ll agree.

THE DARKER SIDE OF COMEDY (Gaynor)

I love watching comedy programmes especially ones like Live at the Apollo, Mock the Week and Russell Howard’s Good News. Frankie Boyle who once was the Scottish hero of comedy has slowly become one of the most hated public figures in the UK due to his crude and most of the time below the belt remarks, most recently on the Paralympics. The Glasgow born ‘funny man’ has announced he will be looking to quit comedy quite soon in order to spend more time with his kids. This will probably be a relief for a few people who are normally at the butt of his jokes especially people like Katie Price!

How much skin to skin contact do you have with other people over the course of the day? I don’t mean in an intimate way, but just in a simple, platonic way. With the onset of the technological age, it seems electronic interaction has replaced human contact. But do you think you could hug a complete stranger in the street? The Free Hugs movement does! Starting in Sydney back in 2004, the movement went viral in just a couple of months. Would I run with arms wide open to hug a stranger? I’m not sure, but I would certainly walk away smiling.