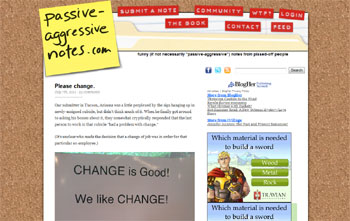 In news straight out of a sci-fi horror film, it’s been revealed that a team of Japanese researchers are currently creating a robot that mimics the precise, wave-like body movements of gastropods. Yes, that’s right – mad scientists in the Far East are actually making a robo-slug.

The project is being led by a team of researchers at Chuo University’s Nakamura Lab, who have revealed that they are also experimenting with snail-style robots that can climb walls. I’m fully expecting this to be the first wave in the inevitable war against the machines that science fiction has warned us about.

WHAT DO A DONKEY AND A ZEBRA MAKE (Pamela)

Ever heard of a Zonkey?  Well you have now.  This delightful creature was born out of a natural relationship between a zebra and a donkey after they were permitted to court each other at a zoo in China.  I don’t know if the Zonkey will be able to mate productively, but it sure would be great if more animals could do this.  Imagine a crocodile and a hippo mated.  Would we have a crippo or a hippodile?

THOSE IRISH THEY GET EVERYWHERE! (Laura)

No matter where you go in the world you are 99.99% guaranteed to bump into someone of Irish descent and now it seems that even in the sub zero temperature of Antarctica, where there isn’t a human to be seen for miles around that you will still find traces of Irish blood. How you may ask? Well it turns out that the humble polar bear’s great, great, great, great, great, great grand relations came from none other than the emerald isle.

DNA research has shown that every single polar bear alive today can be traced to a single brown female bear living in Ireland during the last age around 110,000 years ago. Incredulous as it may seem, the Irish bear is the earliest known ancestor of today’s polar bear, after interbreeding as well as historical geography allowed the evolution of the arctic beast to occur. It certainly is fascinating stuff and sure it’s handy to know that if you ever do come face to face with a polar bear, hand him a pint of Guinness and you be ‘grand so’!

TAKE YOUR ANGER OUT (Andrea)

Ever written a note out of anger of a situation and left it for the offending person to read whilst you’re not there? This website has brought all those passive aggressive notes together into one lovely website for everyone to see. It’s not all sunshine and rainbows, but it’s funny to see what p*%$!s people off.

HAIR TODAY – AND HAIR FROM THE PAST (Raymond)

Considering how often hair preoccupies people’s thoughts (and moods), there’s not been much online until the arrival of this blog which celebrates hairstyles across all cultures, trends and divides.  Inevitably, that means there’s a  fair share of the good, bad – and the downright weird.