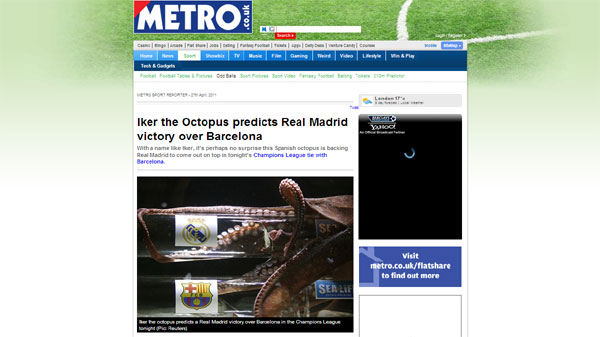 We’ve scoured the papers, social media news feeds and the web today to bring you today’s top links. We’d love to hear your comments on anything we have mentioned on our facebook and twitter pages and as always any suggestions for future links are much appreciated.

A one and half year old boy has become the youngest person in history to sign a football contract.  The tiny Dutch-man secured the ten year deal with Venlose Voetbal Venerniging (VVV) after he scored almost one million hits on Youtube after the tot’s dad posted a video of the boy shooting three balls into his toy box.  It’s a tad presumptuous because I was brilliant at dancing as a child, and now I can’t even do a two step without missing a beat.  Good luck wee man!

Ever ones to flag up the latest trends, we came across the latest show sport taking the world by storm – rabbit jumping. Think of it like a mixture of horse dressage and show jumping, but with cute furry bunnies instead of horses. Invented in Sweden in the 1980’s bunnies complete a course of hurdles and the winner is deemed the one who can jump the most hurdles. It has recently gained in popularity with countries across Europe and even the U.S and Canada hosting their own bunny hopping competitions. Just take a look at world champion Snoopy showing off his stuff in the article below – too cute for words!

Labour MP Lisa Nandy got a little more attention than she bargained for after her choice of low cut blouse sparked a sexism debate on twitter, just one day after the Prime Minister was branded a sexist for his Michael Winner-esque remark. Whilst Nandy’s choice of clothing maybe a bit too revealing it has unleashed a debate about sexism with many raising the question of who her boobs really belong too as well as emphasising the struggle that women have to be taken seriously in Parliament today. Unfortunately for Nandy her sensational bosom has drawn attention away her from her bill – which for the less shallow of us urged the Government to back only those British projects in developing countries which protected human rights and the environment. Maybe she should save her more revealing outfits for the bar and not for Parliament.

The breakout star of the last World Cup – Paul the psychic octopus – may be dead, but it seems like there are a slew of pretenders ready to take over his clairvoyant mantle. The newest of these is Iker, who was dragged out in front of the cameras to predict the result of last night’s Barcelona vs Real Madrid Champions League clash. The octopus “predicted” that Real would emerge victorious and reach the final after picking a sardine from two plastic boxes in his tank, each of which were emblazoned with the clubs’ crests. Unfortunately, the subsequent 2-0 win for Barcelona put a bit of a dampener on the octopus’s prediction but zoo bosses say that he’s still got the psychic touch. After all, Iker’s managed correct picks for the last two El Classico matches in Spain – including Real’s Copa Del Rey triumph earlier this month – although I’m not exactly sure how he managed to predict the 1-1 draw in the other game.

Harry Potter fever is about to hit again, with the release of the young wizards new film this July. Whilst it may be 2 months off the makers of the film have released this specially extended trailer to get fans young and old feeling the Hogwarts magic. Whilst many of us know the outcome, it looks set to be a magical and stunning piece of cinema – one which could if Warners play their card right break a few box office records.