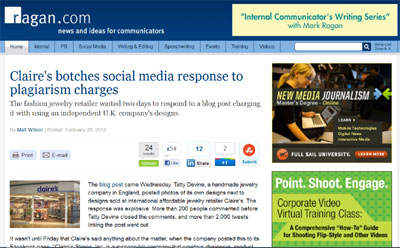 The overwhelmingly negative coverage on both social media channels and in the mainstream media raised questions about the quality of the PR response from Claire’s.

Holyrood PR director Scott Douglas gave his thoughts on his blog, Black and White and Read All Over, pointing out the case bore remarkable similarities to an American case from a year earlier.

As a result, Scott was then contacted by a reporter from the respected Ragan.com website, a valuable news resours for communictor all over the world. You can read the full article on the ragan.com website.

If you are interested in reading the full response Scott provided on the issue, we have included it below:

Q – How would you grade the response?
A – It’s a classic PR response.
Unfortunately for Claire’s that’s ‘classic’ as in vintage and a bit quaint. The lines are recognisable and easy on the eye, but not really fit for purpose in 2012.
Did I mention slow? In social media terms it was so late it might as well have come from the same period as the contentious dinosaur necklace design (somewhere around the Jurassic).
The result was yet another big brand learning a painful lesson: coverage in the mainstream media is increasingly influenced by the early reaction on social media. The print and broadcast coverage then fuels and informs further online reaction and debate.
That’s a virtuous circle when a brand gets it right, but an increasingly vicious circle when they don’t. The vacuum left by Claire’s was only going to end in one result.
Even until recently, when brands faced a pitchfork mob online, they could seek safe haven in the traditional media, where all the real-time shenanigans were rather frowned upon. Not any more.
Claire’s has a great social presence AND an accomplished PR team. They didn’t join up here at all (why, I have no idea) which means I’d grade the response as both a PR disaster and a #fail.

Q – What could Claire’s have said to garner a better reaction?
A – The first thing they should’ve said was ‘sorry’, though no doubt the lawyers kiboshed that.
People, including many Claire’s customers responded to this story with an emotional, gut reaction. That needs a human response, as well as a considered legal response.
Here’s the thing. saying ‘sorry’ doesn’t have to be an admission of liability. Claire’s could easily have said:
“The pictures show remarkable similarities and clearly that’s upset a lot of people. We understand those reactions. That’s why we’re determined to get to the bottom of what happened and launched an immediate investigation. We promise to keep you updated.”
It would have helped if they’d also pulled the items from sale.
Then they could have made a more effective job of signposting people to relevant content showing the company in a more positive light (examples of their support for independent designers; the company’s ‘Code of Business Conduct’ etc).
Mostly though, they should just have said: “We’re sorry this has upset so many people. We’ve seen the pictures and understand why – we’re taking steps to resolve this situation.”
And they should have said it *a lot*.

Q – What can the chain do now to repair its bruised reputation?
A – In all honesty, they’ve probably already ridden out the worst. Even if Tatty Devine take legal action, it will probably be settled quietly.
The perennial question about these social media flare ups we’ve seen in the past two years is whether they have any lasting effect on big brands involved? How many of those complaining most loudly were actually Claire’s customers?
Already the facebook page is getting back to business as usual, there’s no reference to the issue on the company website (including the corporate press section) and mentions in Twitter are drying up.
The story has probably almost run its course.
I think ‘bruising’ is the right word. This experience may not result in an epiphany the way it did for Dell or Comcast.
But I’d like to think this short lived reputational bloody nose will result in greater care from Claire’s on checking the origin of designs it uses.
Ultimately, that’s what all those upset people online – especially Claire’s customers – want to see.

Q – On the topic of Tatty Devine, how do you think they made the best out of the situation?
A – They handled it brilliantly.
I’m as convinced as I can be they carefully and meticulously reviewed the Urban Outfitters ‘jewellery rip off’ case from a year earlier, so knew exactly what to expect.
The firm’s ‘spot the difference’ blog was elegant in both its understated simplicity and its modest objective that: “We’re very much hoping Claire’s will be willing to withdraw these pieces.”
Light blue touch paper. Withdraw to a safe distance. Enjoy the fireworks.
As far as Tatty Devine is concerned, it’s got to be mission accomplished.

Q – You note that this isn’t the first time something like this has happened. Do you think big chains will ever learn that this stuff doesn’t fly on social media?
A – What many of us hope for is that we’ll see corporate transparency become the standard businesses aspire to. We’ve certainly seen great examples where those with questionable, unethical or other shoddy practices have their feet held to the fire by consumers empowered by social media.
However, there’s a tendency to get too carried away. Yes, social media makes businesses more accountable, but let’s not kid ourselves that it’s a magical panacea to end bad judgment, greed or corporate slovenliness.
Just six months ago social media evangelist might have considered it unthinkable for a company to continue deleting negative or unfavourable facebook comments at the height of a social media firestorm spanning both sides of the Atlantic.
Nobody seems to have told that to Claire’s Accessories and they’re still coming out of the other end of this issue pretty intact.
We’ve still got a long way to go in the evolution of the media and what it means for businesses.