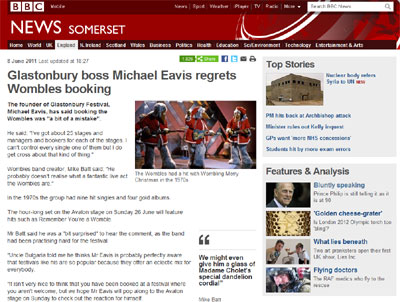 THE WOMBLES OF GLASTONBURY VALE ARE WE (Adrian)

The Glastonbury Festival often attracts many of the weird and wonderful  musical acts from around the globe. But this year, the bizarre factor has been upped a notch with the inclusion of 70s gimmick band the Wombles on the festival line-up.

The group – famous for their “hit” Remember You’re A Womble – have been booked to perform on the Avalon Stage at the event, where they will no doubt prove a star attraction for scruffy hippies boozed up on Somerset cider who really, really ought to know better. However, after some sombre reflection, even festival organiser Michael Eavis has now expressed regret about the decision to book the group – saying that he is “a bit cross” about the fact they’ll be performing an hour-long set at the 3-day extravanganza.

The group’s creator Mike Batt said the band have been practising hard for the gig and promised that fans would not be disappointed. Uncle Bulgaria is also reported to be upset with Mr Eavis’s comments.

The 2008 film ‘The Bucket List’ starring Jack Nicholson and Morgan Freeman where we see the two terminally ill characters create a “bucket list” before “kicking the bucket” is of course a very touching film but for Alice Pyne it was inspiring. The 15-year-old girl who has created herself a bucket list, has fought a four-year battle with Hodgkin’s lymphoma and thanks to the social networking site Twitter she has support across the globe from celebrities such as Hollywood actor Channing Tatum as well as footballers such as Rio Ferdinand, the Manchester United player, and Philip Schofield the presenter. These celebrities have helped spread the word by making everyone aware of the teenager’s blog post. This world-wide attention will hopefully help Alice achieve her bucket list goals which include swimming with sharks, meeting the pop band Take That and making everyone sign up to be a bone marrow donor. The list continues. If you want to help Alice complete her goals, follow the young 15-year-old on Twitter and continue to help spread the word.

This short film shows how video can help tell any story better. It tells the tale of Panyee Football Club, started by a group of  young lads who played barefoot on a cobbled together pontoon next to their floating village, where the biggest threat to players was from protruding nails. They went on to become one of the most promising youth teams in Thailand. Watch out for the Hollywood version.

BLOW UP DOLL PRANK IS BLOWN OUT OF PROPORTION (Pamela)

A teenager in America is facing eight years in jail after he was caught on CCTV walking into the girls’ toilets at his school with a package then immediately leaving without it.  Turns out the lad thought himself as a bit of prankster, and that leaving a blow up doll in the girls’ restroom would be a tear.  However the judge didn’t see the funny side.   Poor boy had a clean record up until this point.  I wonder how they’ll phrase it in these ‘permanent records’ educators claim to have in the States.

ENOUGH TO DRIVE YOU MENTAL (Raymond)

An interesting survey by those smart PRs at confused.com has revealed Britain’s 10 ‘unluckiest’ cars.  These sorts of surveys are always worth a look – not least so you can josh your pal who may well be an owner of one of the unfortunate vehicles to make this sad list.  The criteria is the model of car that has been involved in the most accidents or insurance claims.  Top of the list of the most unlucky car list is the six-seater Honda FR-V. Between them, 2,529 owners of these vehicles made 466 accident claims in the past five years. That’s a claim rate of 18.4 per cent or almost one in five.  Next comes the Volvo XC90: of the 3,886 drivers of this model, 619 made claims for accidents – a rate of 15.9 per cent.  Thankfully, as an owner of a rather sick Alfa Romeo – although through breakdowns not accidents – I’m happy to report that there are no sign of the Italian brand.