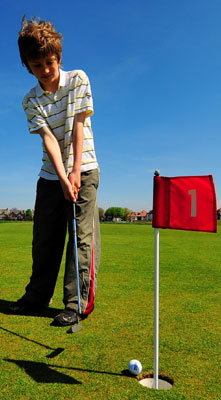 Holyrood PR has been appointed the handle PR campaign for the prestigious U.S. Kids Golf European Championships – an event which will see the creams of world’s best young golfers heading to Scotland in May.

More than 400 players from some 30 nations will be competing in the Championships, which have emerged as Europe’s premier junior tournament to showcase the next generation of golfing stars.

The event – to be held across five of Scotland’s historic golf courses in East Lothian over May 26-28 – sees boys and girls split into different gender and age categories in order to compete for individual titles of U.S. Kids Golf European champions.

Holyrood PR has been tasked to help promote the event across the world, in particular to attract more entries and to highlight the boost to the local economy and the growth of golf among children.

Holyrood PR co-Director Raymond Notarangelo said: “We are delighted to be working with such a major worldwide brand as U.S. Kids Golf to promote their European Championship. We have some great ideas we’re working up to help drive awareness and promote this great event around the globe.”

Tournament Co-ordinator Alasdair Good, Head Professional at Gullane Golf Club, said: “Interest in golf in Scotland is on a high just now. The Scottish Government, through its clubgolf programme, is aiming to continue its commitment to introduce golf to all nine-year-olds and we’ve just seen the Scottish amateur team win the Eisenhower Cup in Australia.

“The U.S. Kids Golf European Championship will continue to showcase both golf in Scotland and the emerging talent in the game.”

U.S. Kids Golf is the world’s largest producer of junior golf equipment for ages 14 and under. It has pioneered the development of golf clubs for young people, eliminating the problem of kids using heavier, cut-down adult clubs which often hurts developing swings and discourages budding players.

Malcolm Roughead OBE, Director of Visitor Engagement at VisitScotland, added: “We are delighted to welcome U.S. Kids Golf Championships to the Home of Golf.

“2009 is a very exciting year for Scottish golf with the return of the Open Championship to Turnberry this year in July and with the country celebrating the year of Homecoming Scotland.”