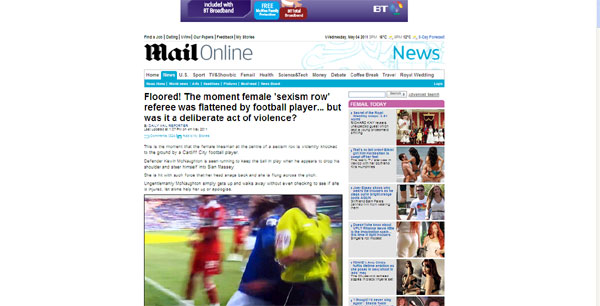 We have put together this 5 a side medley of the day’s best news stories for you to enjoy and if you want to chant out and support your favourite link why no leave us a comment on our facebook and twitter pages? If you think you havewhat it takes to knock one of our players off the captaincy then why not suggest your own links – you never know it may just appear in tomorrows starting line up.

Female referee Sian Massey became one of football’s most talked about referees earlier this year after she unwittingly found herself the subject of a sexism row along with presenters Andy Gray and Richard Keys. Now the row has been refuelled after Cardiff City footballer Kevin McNaughton crashed into lines woman Sian during Monday’s match against Middlesbrough. Whilst run ins like this are a regular occurrence during football matches and Sian gets up smiling and unharmed, it has been suggested by some YouTube users that the collision was deliberate. True Kevin does crash into Sian at full pelt sending her flying without even an apology – but how many times have you seen footballers apologising to linesmen – not very often. Cardiff City has issued a statement saying that Kevin didn’t crash into the lines woman on purpose and from watching the video it remains unclear. What is for certain is that Sian Massey is simply trying to carry out her job and so far has found herself subjected to sexism that she should not have to endure. Sian should be left to carry out her job with the professionalism that she already does and fans, players and commentators should show sexism the red card when it comes to the beautiful game.

YOU PUT YOUR LEFT FOOT IN…(Raymond)

Lead with the ball of your foot for control and a lightness of step, as leading with your heel will give you a heavy and clumsy walk. Then, smile…What else – but the latest advice on how to be like Pippa. Chyna Whyne of sexyheelsinthecity.com is offering top tips on how to perfect the ultimate sexy walk as illustrated – to now global acclaim – by Pippa Middleton. Chyna who gives tutorials to brides and bridesmaids on how to glide down the aisle in style says it’s all about technique – although acknowledging that Pippa did exude sensuality in her couture £20k McQueen dress. Is this becoming obsessive? Who is the audience here – men or women?

ANOTHER YEAR IN CELULOID (Adrian)

We’re not even into this year’s summer blockbuster season yet, but already there’s a list of the biggest must-see films that will hit the multiplexes in 2012.In a display of impressive forward planning, the big studios have already set next summer’s schedules with release dates for movies that haven’t even started filming yet. So while you’re enjoying Thor and Captain America in the coming months, just remember that the release date has already been set for the next movie in the comic book franchise – the Avengers, due on May 4th 2012. Despite all the bland sequels and remakes on the list, the one that’s caught my eye is the phenomenally-titled Abraham Lincoln: Vampire Hunter. That just sounds awesome.

A teenage girl who was dropped from her high school’s cheerleading squad after refusing to chant the name of a basketball player who had sexually assaulted her must pay compensation of $45,000 (£27,300) after losing a legal challenge against the decision. It’s interesting that the American courts decided that she was speaking on behalf of the school, rather than herself, when serving on the cheerleading squad – therefore she apparently had no right to stay silent when coaches told her to applaud. Does one act of defiance automatically mean dismissal from a cheerleading squad? Is there no element of sympathy from the school? Freedom of speech is brought into question in this case and it seems there is a certain amount of injustice for the teenager, who initially had to go through the courts claiming she was raped by the basketball player. Do you think the court’s decision was fair?

It’s a recurring theme in literature and popular culture – the outwardly normal and respectable neighbours with a hidden secret (think movies like Pacific Heights, History of Violence, The Joneses). Spare a thought for the ordinary folk in Abbotabad whose polite, wealthy and unobtrusive people next door were the most wanted family in history.