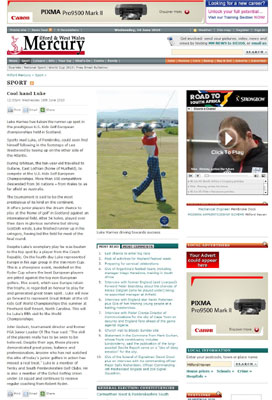 Europe’s premier junior golf tournament has received another high profile piece of coverage thanks to Holyrood PR PR in Scotland.

The U.S. Kids Golf European Championship was featured in the Milford and West Wales Mercury, which reported on the achievements of young Welsh golfer Luke Harries.

The 10-year-old player beat scores of competitors from around the world to take the runner up spot in his age group at the tournament. He was one of around 500 young golfers to participate in the event, which was staged on some of the oldest links in East Lothian earlier this month.

The full article can be seen on the Milford and West Wales Mercury website and was the result of a sustained PR in Scotland strategy by the Holyrood PR.