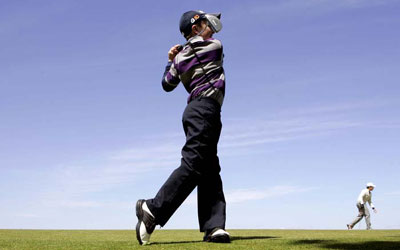 Three young golfers have managed to achieve what many professionals can only dream about – hitting a hole-in-one at a prestigious international tournament.

The youngsters all scored an ace during the same competition, as the cream of the World’s young golfing talent came together at the US Kids Golf European Championship.

The three day tournament took place over some of Scotland’s most historic golf courses, with the highlight being the three holes in one scored by three youngsters over three different courses.

The astonishing shots were completed by; Lucy Walton in the Girls 10 age category on Gullane No3, hole No  2 and from 106 yards; Kritjan Vojteh Berkelca in the boys under 7 category on Longniddry, hole No 13 from 91 yards and Lewis Reid Boys 12 age category on Craigielaw hole No 10 from 133 yards.

Dan Van Horn president of the US Kids Golf Foundation – who organised the event with the aim to promote golf to young players and their families all over the world said: “This has been a great event that has showcased the very best junior golf talent from around the world.

“We have seen some superb scoring, with a number of sub par rounds, but the undoubted highlights have been the three holes in one.  There will be many golfers who will go near a life time without getting a hole in one, but three kids have shown them how to do it.  It just really reflects the quality and talent that exists among the young golfing stars of the future.

“The US Kids Golf European Championship was designed to help young players bond and enjoy their time together on and off the course.  Although they’re competing against each other, it has been wonderful to see so many young players form new friendships during their time in East Lothian.”

Around 500 competitors from more than 30 different nations took part this year and competitors from eight different countries – including the small central American nation of Guatemala – scooped European Championship titles, reflecting both the growth and spread of junior golf around the world.

The tournament, now in its third year, is played over Gullane No. 2, Gullane No.3, Craigielaw golf club and Longniddry golf club and is one of the highlights of the junior golfing calendar.

Golfers as young as six and up to the age of eighteen competed in their respected age and gender categories and the winners from each category took part in the Van Horn Cup over Gullane No.1.

A showpiece event based around the Ryder Cup, the best European talent was pitted against the best Non European talent and this year Europe retained their title for the third year running with a 13-0 win.

The top finishers will now go on to compete in the US Kids Golf World Championship event at Pinehurst Golf Club in North Carolina.

Alasdair Good Tournament Coordinator and head PGA professional at Gullane Golf Club said: “The standard has been excellent this year and we’ve been very impressed with the way these young golfers have performed.

“Its always very pleasing to see the excellent golf offering in East Lothian take centre stage in such a major tournament like this and judging by the comments we have received from parents and children, its clear the region has given a very good account of itself.”

The U.S. Kids Golf Foundation was launched in 2001 to provide opportunities for kids to play and learn the game through local tours and tournaments. Since holding its first tournament in 2000, the U.S. Kids Golf Foundation now runs some 400 events each year with 2009 World Championships – the largest and most prestigious golf tournament for kids in the world – attracting more than 1,200 players for the second year in a row.  A Teen World Championship for golfers ages 13-18 is also now being staged, attracting an additional 450 golfers.

Next years European Championship will take place May 31 – June 2 in East Lothian. More information on the tournament can be found at www.uskidsgolf.com

Press release issued on behalf of the US Kids Golf European Championship as part of a succesful PR and social media campaign carried out by the Holyrood PR.