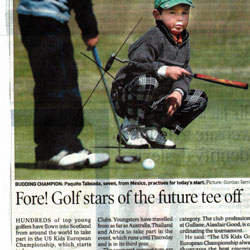 Scottish national newspaper the Herald has covered a story on the US Kids Golf European Championship which took place at the beginning of June.

The US Kid’s Golf tournament was played out on some of Scotland’s most historic golf courses in and around East Lothian – the competition saw over 400 young hopefuls aged six to eighteen take to the green and tee off, in a number of age related categories.

For the next generation of golfing stars The European Championships provide a platform onto the world stage – the mission of the US Kids Golf Tournament’s is to ensure kids incorporate both fun and play while learning to play golf.

Tournament co-ordinator Alastair Good said: “The US Kids Golf European Championship always showcases the best emerging talent in the game and this year will involve one of the biggest fields of we have ever had.”

The US kids Golf Championship was a surrounding success and will be returning to Scottish soil in June 2011.

The full artcile can be found here and was secured as part of a successful public relations campaign carried out by the Holyrood PR Edinburgh.