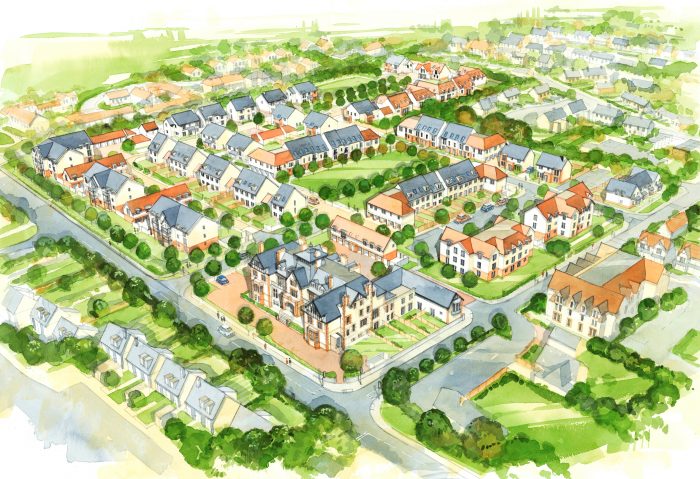 A HIGHLY anticipated brownfield housing development has been given the go-ahead by East Lothian Council – marking a new chapter for a landmark building in the heart of Gullane.

CALA Homes’ detailed plans at the former Fire College site on the village’s Main Street, were approved unanimously by councillors on Wednesday 29 March – paving the way for 125 new homes.

Initially granted Planning Permission in Principle in April 2016, central to the proposals is the sensitive renovation of the landmark Henderson House, as well as on-site provision of 31 high-quality affordable homes.

The developer has also pledged to invest £1,843,000 towards local education and other public facilities.

Craig Lynes, Land Director at CALA Homes (East), said: “Henderson House is a much loved building, although not listed, it is a local landmark and building of importance having played several roles in its history.

“Because of this, at the public consultation and throughout our engagements with the community, we’ve heard from a good number of locals relieved at the plans for the sensitive restoration planned for Henderson House.

“Many Gullane residents have also expressed early interest in securing a move – as this project offers a range of bespoke product to include a large number of downsizing opportunities that have been in very short supply in recent years.

“We look forward to continued engagement with the local residents during the redevelopment of this site in a planned and considered manner, to ensure that inconvenience is kept to a minimum”.

The 125 homes will consist of a wide range of apartments, mews, terraced units, semi-detached and detached housing. It will comprise bespoke homes designed specifically for this site and location.

Most recently used as Scottish Fire and Rescue Service’s College, the site was originally a hotel and will retain its distinctive look in CALA’s site plan that aims to blend its latest development with the existing village.

Work on site to demolish existing buildings will start imminently, with the first homes completed in late Summer 2018.  CALA plans to begin the work to sensitively redevelop the landmark Henderson House alongside the building of bespoke homes built within the grounds.

CALA Homes, which has its national Head Office in Edinburgh, has had a long association with the coastal villages and towns in East Lothian, including current developments in North Berwick, and has previously developed in Gullane.

CALA Homes is headquartered in Scotland, employs more than 850 people and earned its reputation on the high quality of the homes it builds, which are sensitively designed to augment the areas in which they are located.

To engage with your audience, get in touch with our property PR experts today.