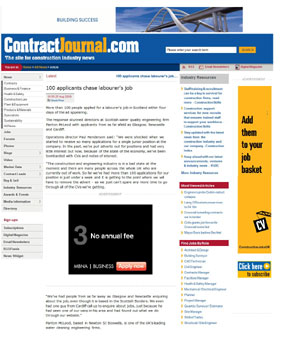 Water quality engineering firm Panton McLeod has receied another Scottish PR boost after a story about its recent job advert was featured in the construction press.

Contact Journal Online reported on how more than a hundred desperate construction workers had flooded the Borders firm with applications for a position with the firm, after directors had advertised for a new labourer to join the team.

The online magazine said that the rush of applicants had come within the first four days of the job advert being posted in job centres across the Borders. Applicants from as far afield as Northumberland, Glasgow and Cardiff applied for the position – showing how the construction industry has been badly affected by the recession.

The full article appeared in Contract Journal Online and was the result of a sustained Scottish PR campaign by Edinburgh public relations agency the Holyrood PR.