Help Yourself To Our Dolly Mixture 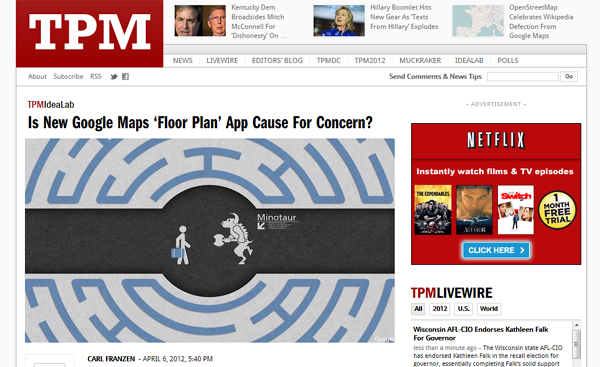 You can find out more about what makes the team tick at our Twitter and Facebook pages.

I love Google Maps and could spend hours sitting there looking up images of places I’ve been and seen but now the search engine giant has gone one step further with its latest app which allows users to view building floor plans. So now much like Harry Potter’s magical marauder’s map people will now be able to see deatiled floor plans for buildings all over the world. This has sparked some controversy with some saying it could lead to bank heists and terrorist attacks. What does everyone else think?  http://idealab.talkingpointsmemo.com/2012/04/google-maps-floor-plan.php

To promote Legoland’s Windsor resort ,agency DLKW Lowe has produced the world’s smallest billboards and placed them around London. Some might see them as a hazard as many are in the middle of the pavement but as the writer says in this article no one can stay mad at Lego. The best bit about the campaign is that passersby are encouraged to take a picture if they spot a Lego billboard and to send it via twitter including the hash tag #legolandminibreaks. My favourite board has to be the one with the mini spotlights, a great way to use traditional advertising in a different way. http://www.brandingmagazine.com/2012/04/04/smallest-billboards-in-the-world-made-out-of-legos/

Many of us grew up with the Simpsons as a regular fixture on our television screens. The creator of the long running sitcom, Matt Groening has now revealed the true inspiration for the fictional town of Springfield; a town sharing the same name that lies south of the town he grew up in, Springfield in Oregon. The show, now in it’s 23rd season, has baffled people since the start about it’s location, and with 38 registered towns sharing the same name, with five in Wisconsin alone, Groening has now put the matter to rest. You can certainly see the likeness between the two and understand the inspiration in the pictures below. http://www.dailymail.co.uk/news/article-2127965/The-Simpsons-Real-location-Springfield-revealed-creator-Matt-Groening.html

No one likes a smelly breathed mofo and even less of us like the prospect of having to break the news to the unfortunate victim! Why not try a new tactic-faint in their face! That’s the idea behind this new ad campaign from mint giant, Tic Tac which showcases the effectiveness of the tried and tested flash mob! Watch as victims are pounced on by a suspected curious tourist only for them and the surrounding crowd to faint leaving them in a blind panic! http://www.youtube.com/watch?v=Sh30EIkgE4o&feature=player_embedded

Buskers had been barred from playing bagpipes, bongos and other percussion instruments on the city’s streets as a result of new noise regulations.The ban has now been lifted by Vancouver Mayor Gregor Robertson, who proudly claims Scottish descent. Cabinet Secretary for Culture and External Affairs Fiona Hyslop has welcomed the reversal of Vancouver’s bagpipe ban.The reversal of the ban comes as the city is about to celebrate Scotland week and what more of a fitting gesture is there than lifting the countries national instrument. Now Scots in Canada can have nothing to DRONE about. http://www.deadlinenews.co.uk/2012/04/11/vancouver-bagpipe-ban-lifted/