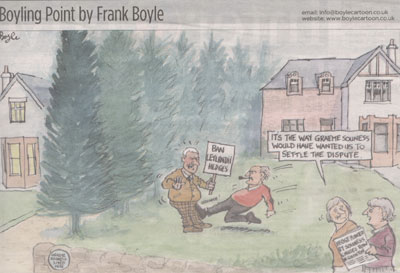 Scothedge, the campaign group set up to promote the issue of disputes over high hedges across the country, has been celebrating another Scottish PR success thanks to Holyrood PR.

The issue of “hedge rage” in Edinburgh, which was highlighted last week by the Evening News, has become the basis for a new sketch by the paper’s resident award-winning cartoonist Frank Boyle.

Boyle, a winner of the coveted cartoonist of the year award at the Scottish Press Awards, took a fancy to the recent News story featuring one of Scothedge’s members. In the article, the issue of “hedge rage” was discussed in depth – although the newspaper also highlighted the fact that the trees involved in the dispute had actually been planed by former hard man footballer Graeme Souness.

In his own inimitable style, the master cartoonist has created a sketch bristling with humour but also helping to keep the problem issue of high hedges in the public eye. Scothedge now hopes the cartoon will encourage more victims to come forward and have their say on a Government consultation into the issue.

The Scothedge campaign is supported by Edinburgh public relations agency Holyrood PR, which is helping to promote the campaign group’s PR in Scotland.

The cartoon image is copyright to Frank Boyle and www.boylecartoon.co.uk