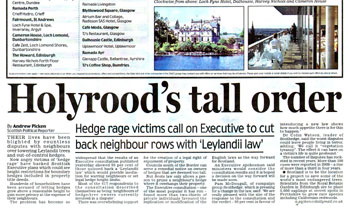 Campaign group Scothedge has been celebrating after securing another high profile piece of coverage in the Scottish national press.

The Daily Mail reported on how the group – which is fighting against the problem of high hedge disputes across the country – had received a boost to its campaign in the Scottish Parliament.

Scothedge was instrumental in raising public awareness of the issue during a consultation into the issue in 2009. It has now backed the introduction of a special “Leylandii Law” and has urged the Scottish Government to consider implementing such a measure to ease problems among neighbours over high hedges.

More information about Scothedge, which is supported by Holyrood PR PR in Edinburgh, can be found on its official website.