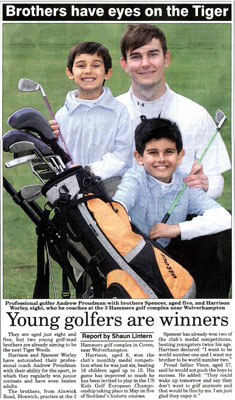 Eight-year-old Harrison Worley has featured in one of the UK’s biggest evening newspapers, the Express & Star, as he bids to become the 2009 U.S. Kids Golf European Champion.

The youngster appeared alongside his brother Spencer, who at five is too young to compete in the 2009 U.S. Kids Golf European Championships, in the newspaper with their coach, Andrew Proudman, under the headline Brothers have eyes on the Tiger.

Proudman, the professional at 3 Hammers Golf Complex near Wolverhampton, is predicting a bright future for the duo.

Harrison is due to travel to East Lothian, Scotland this month to compete against more than 400 of the world’s best young golfers from some 30 countries, which the Express & Star describes as his biggest tournament of the year.