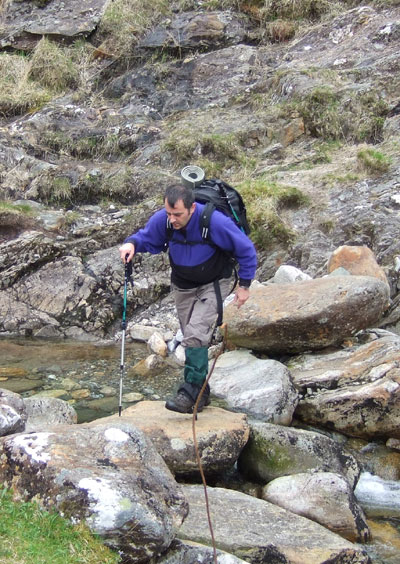 At a Daily Record leaving do, louche sax man (and top class sub – well, he still needs to make a living) Frank Morgan raises a quizzical eyebrow and asks me: “What is it about men of a certain age that they feel the need to go yomping off into the wilds of Knoydart?”

Ten days later Greig Cameron, the tireless engine room of Business 7 newspaper, is left agog when a fluffy PR type phones him and breathlessly inquires: “When does the Daily Record come out?”

At this point let me dip a toe into the rather muddy waters of the hack-v-flack debate (to the uninitiated or just the plain disinterested a “hack” is a journalist and a “flack” is a PR person).

It’s a subject which caught my eye because Kevin Taylor, the President of the CIPR recently wrote on this very subject, asking: Journalists and PRs: can it ever be a marriage?

All of which set me thinking about these two unrelated stories which, for me, perfectly sum up the rather pointless divisions that seem to exist between our two professions.

Frank’s friendly dig referred to me and a bunch of 40-something mates (all current or ex-newspaper men) who recently ventured into Scotland’s last wilderness.

PR experts who can spot a story

Mid-life crises aside, the trip also yielded the perfect example of what it means to be a journalist. What I’m talking about here is a proper, good-old fashioned story spotter, story digger and story prosecutor.

Step up then Raymond Notarangelo – the man who spent a night in the middle of nowhere (picture shows Raymond out, er, digging up stories) in one of Scotland’s remotest bothies and still came away with two top stories which walked into various Scottish news outlets.

Here’s the thing though: our bold champion of story-spotting hasn’t actually been a working journalist for nigh on a decade. For the past seven years he’s been the main PR driving force of Holyrood PR, public relations in Edinburgh. Before that he was the acceptable media face of West of Scotland Water.

In other words he’s a flack. A fully paid up and quite unashamed PR man. Which means there will be many out there in media land who see only a name at the bottom of a press release and make their assumptions accordingly.

Sadly, those assumptions are all too often negative. There are those in the media who readily buy into the notion that PR is the “dark side”.

Learning the ropes in public relations

That it’s some sort of handsomely-salaried, expense-account schmooze-fest, full of lazy, talentless smarms. Where the women are dim and blonde and exist purely to giggle coquettishly at alpha male stereotypes in the client’s corporate boardroom. Where the men are sharp-suited but shifty-eyed chancers in a latter day snake-oil enterprise.

Which brings me to the  second event I mentioned. The poor, hapless and benighted young PR exec who phoned the Daily (the clue is in the name) Record to ask when it is published.

Granted, it’s not an episode that is going to cover the PR sector in glory. Particularly since the “PR phone round” of news rooms is one of the biggest thorns in the side of Scottish journalism.

Then again, I’d have to say that the poor girl is just learning the ropes – and the mistakes she makes now are no reason to judge an entire profession harshly. Getting stuck behind an L-driver on the way home, isn’t reason to hate everyone who’s ever climbed behind the wheel of a car.

But the invective and all one way. It’s a common claim among PRs (particularly while pitching to clients) that “journalists are lazy” and want PRs to do their job for them.

A place for PR in quality journalism

I can already sense the blood boiling among those with decent journalistic principles who slog for 12 hours a day in depleted newsrooms – yet still have to watch despairingly as the web strips away income with one hand, and sneeringly delivers up jibes about failing standards with the other.

Likewise PRs will casually cite the “poor quality of modern journalism” to explain to clients why stories didn’t make as big or as favourably as expected (because the quality of the underlying story or the press release couldn’t possibly be to blame, could it?)

Those same PRs will  rarely take time to defend the media by highlighting the reduced staffing schedules, demands of deadlines or the pressures of space. And they care little for the harsh journalistic taskmaster called balance, which insists every story has to be approached from at least two perspectives.

All of which tells us what precisely?

Firstly, that there are no easy gigs in the Scottish media on either side of the fence. Secondly, that the stereotypes of what makes a journalist or what makes a PR person simply don’t wash any more.

The reality is that – like it or not – the Scottish mainstream media IS a marriage between journalists and PR.  One needs the other as surely as Tory MP needs a moat and a duck pond.

In this era of Flat Earth News and “churnalism” the exchange of rings might have happened at the business end of a shotgun, but the vows were clear. Until death do us part.

So let’s get on with making the marriage work better.

For my part I promise never, ever to phone the Daily Record and ask when it is published – because I know fine well … it’s on a Sunday, isn’t it?