Grandparents Chip in Cash to Replace the Bank of Mum & Dad 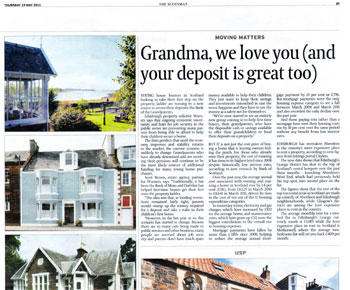 The firm highlighted how many young people were receiving help from their grandparents to secure the deposit for their first home – rather than relying on the traditional “bank of mum and dad”.

Their analysis was featured in the pages of the Scotsman’s property supplement, which suggested that this new phenomenon – the “bank of gran and granddad” – was being witnessed due to the recent public sector cuts and fears for job security. Scott Brown, estate agency partner at Warners, told the paper that many parents no longer felt secure enough to loan their kids the money for their first flat – so grandparents were stepping in to help instead.

The full story appeared in the Scotsman property section and was the result of a sustained PR in Scotland campaign maintained for Warners by Edinburgh public relations experts the Holyrood PR.