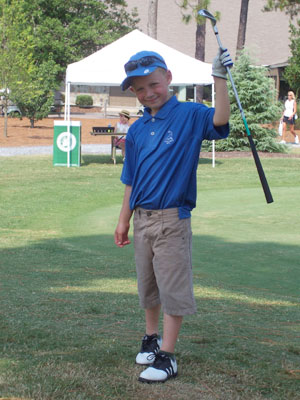 Three young golfers have received the backing of their local newspapers as they prepare to take on 400 of the world’s best young players in the 2009 U.S. Kids Golf European Championships.

The Oxford Mail, the Derby Evening Telegraph and the Grimsby Telegraph have all told how the youngsters will be travelling to East Lothian, Scotland, this month in a bid to be crowned US Kids Golf European Champion.

The positive media coverage, generated in a PR campaign by Holyrood PR, will be a great boost to the youngsters ahead of their trip.

The Oxford Mail features nine-year-old Emily Price, a member at Waterstock GC, while the Grimsby Telegraph previews the fortunes of 13-year-old Ashton Turner in the run up to the event.

The Derby Evening Telegraph tells how eight-year-old Joshua Ashton, pictured right, has already finished as the top placed European in his age group at the U.S. Kids Golf World Championships at Pinehurst, North Carolina in 2006.

The article can be read online here or by visiting http://www.thisisderbyshire.co.uk/news/Golf-Young-Joshua-proves-wee-wonder/article-936200-detail/article.html