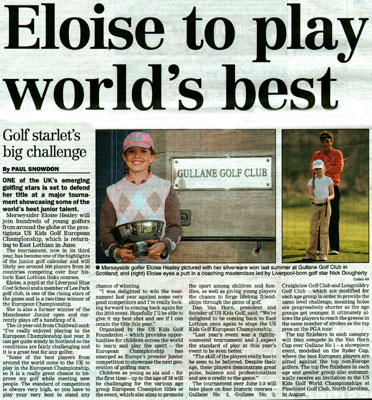 Young golfer Eloise Healey has been featured in an article in local Merseyside newspaper the Maghull and Aintree Star.

Eloise is entering this year’s US Kids Golf European Championship, in the hopes of defending her title from the previous year.

The golfing tournament which is in its third year of running, is the highlight of the junior golf calendar and the biggest golfing event to hit the home of golf this year.

It will see around 500 golfers from over 30 different countries play across four of Scotland’s most historic courses.

Eloise says: “I really enjoyed playing in the European Championships last year.  Some of the best players from around the world come to the UK to play in the event, so it is a really great chance to improve my golf while meeting new people.  The standard of competition is always very high so you have to play your very best to stand any chance of winning.

“I was delighted to win the tournament last year against some very good competitors and I’m really looking forward to coming back again for the 2010 tournament.  Hopefully I’ll be able to give it my best shot and see if I can retain the title this year.”

Organised by the US Kids Golf Foundation, the event aims to promote the game amongst young people as well as families and allow them to forge life long friendships through the game of golf.

Children as young as six and this year for the first time up to the age of eighteen are encouraged to take part in the competition.

Dan Van Horn, president and founder of UK Kids Golf foundation says: “We’re delighted to be coming back to East Lothian once more.  Last years event was a tightly contested tournament and I expect the standard of play this year to be even better.

“The skill of the players really has to be seen to be believed.  despite their age, these players demonstrate great poise, balance and professionalism and are a great credit to the game.”

The tournament will take place June 1-3 and will see players compete to become the best in their assigned age category.  The top finishers in each category will then compete in the Van Horn cup – a showpiece event modelled on the Ryder cup in which European and non-European players pit it out against each other.

The top three finishers in each age and gender group will also receive an invitation to US Kids Golf World Championship at Pinehurst Golf Club, North Carolina in August.

The full article can be read in the Maghull and Aintree star and was secured as part of a successful PR and social media campaign carried out by the Holyrood PR.