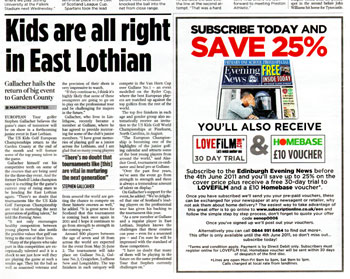 One of Scotland’s top professional golfers has given his backing to a major junior golf tournament taking place in Scotland this summer.

Former Dunhill Links champion Stephen Gallacher has hailed the U.S. Kids Golf European Championship as an important event to help promote golf in Scotland – and his comments have been prominently featured in the Edinburgh Evening News.

Stephen backed the tournament shortly after being granted playing rights at Gullane golf course – one of the host courses for the 2011 tournament – and said that it was an important event in nurturing the next generation of golfing superstars. He added that the 500 youngsters coming to East Lothian were the cream of the world’s best juniors, and some of them could eventually become the Open winners of tomorrow.

The full story can be viewed on the Evening News website and was the result of a sustained public relations campaign for U.S. Kids Golf maintained by Holyrood PR PR in Scotland.