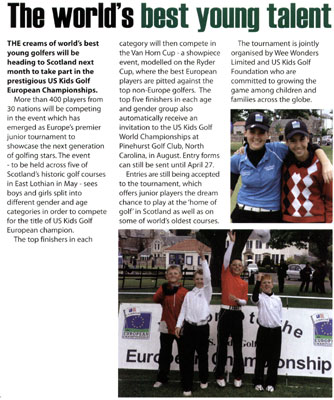 The magazine, which is well read in golf clubs in England and Wales, responded to a press release by Holyrood PR to run a preview feature on the prestigious tournament, which will see more than 400 youngsters from some 30 countries descend on five courses in Scotland in May.

The article, headline The world’s best young talent, told how the cream of young golfing talent would be heading to Scotland and the top five finishers in each age and gender category would qualify for the U.S. Kids Golf World Championships at Pinehurst, North Carolina in August.

It also featured photographs of some of last year’s winners, many of whom will be returning this year to defend their crown.

For more informaton on the tournament visit our news pages here or go to www.uskidsgolf.com