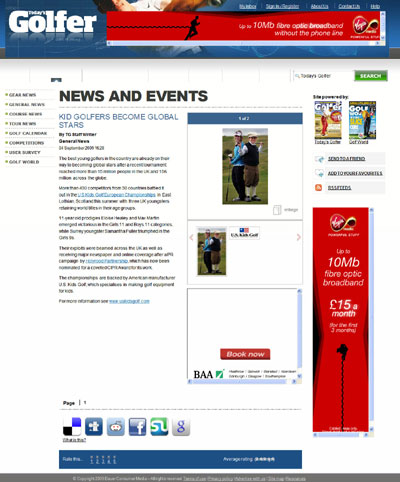 Today’s Golfer magazine has reported how the work of a leading Scottish PR agency has been award-nominated – following its global success in promoting a children’s golf tournament.

Now its credentials have been further underlined, after its work with the U.S. Kids Golf European Championship was shortlisted for an award with the Chartered Institute of Public Relations (CIPR).

Earlier this year Holyrood PR carried out a three-month media campaign to raise awareness of the tournament which took place across five historic links courses in East Lothian in May.

More than 400 youngsters from 40 countries took part and the media campaign ensured news about the tournament reached a potential 160 million global audience.

Now Total Golfer’s website has reported how that success has seen the campaign nominated for the CIPR Scotland’s Best Campaign Under £10k award. You can read the Today’s Golfer report at the magazine’s website.

The final results in the CIPR Scotland awards will be announced in October.