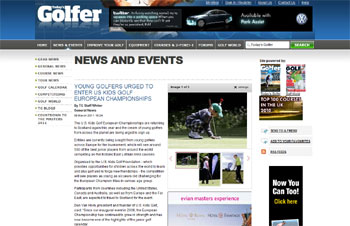 PR in Scotland for golf championship

A major junior golf tournament has received a glowing piece of coverage in one of the UK’s top golfing magazines.

The U.S. Kids Golf European Championship – a three day event showcasing some of the best young players in the world – was featured in Today’s Golfer after it was announced the event was returning to Scotland in 2011.

The event, now in its fourth year, is one of the highlights of the junior golf calendar and sees hundreds of youngsters competing on the links in East Lothian. Many of the young players are considered to be the Major winners of the future and the event traditionally sees plenty of sub-par rounds.

The full article, which was secured thanks to the expertise of Holyrood PR PR in Scotland, can be viewed on the Today’s Golfer website.