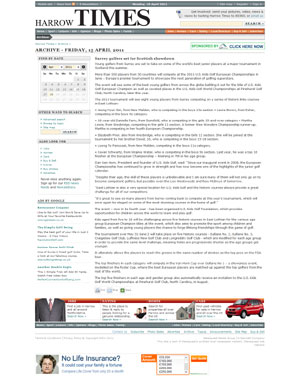 A major junior golf tournament has received more glowing headlines in the UK regional press thanks to the work of Holyrood PR PR in Scotland.

The U.S. Kids Golf European Championship – one of the highlights of the junior sporting calendar – has been featured in the pages of prominent Surrey newspaper the Harrow Times.

The paper highlighted how eight young players from the Surrey region were travelling to Scotland to compete in the championship, which is being staged on five of East Lothian’s historic golf courses.

The youngsters will join around 500 other kids from around the world at the event, who will each be competing for the title of European Champion. Many of the players are expected to become the future stars of the game and potential Major winners of tomorrow.

You can read the full coverage on the Harrow Times website – or learn more about the event at www.uskidsgolf.com