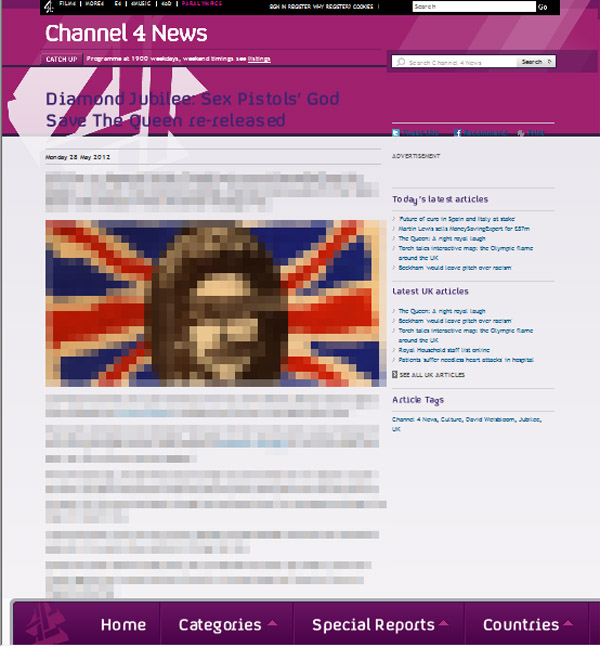 To mark the sixty years of the Queen’s reign Diamond Jubilee celebrations will take place up and down the country this weekend.  Whether you’re a monarchist or anti-monarchist it will be difficult to avoid the hype this weekend.

Since the 16th May the famous Harrods store, which is as much a national emblem as the Queen herself, has been playing the national anthem on the hour every hour in honour of the Queen’s Diamond Jubilee

As the weekend’s celebrations commence I fully expect at one point or another I will hear God Save the Queen.

However, I’m not only referring to the national anthem but also to the 1977 Sex Pistol’s hit, which celebrates its 35th anniversary.

Colliding with the Queen’s Silver Jubilee the controversial single was banned from television and radio airwaves and many record shops and high street chains Woolworths and WH Smith refused to stock it because of its cover and lyrics.

Unusually for a punk song there was no swearing in God Save the Queen but “Queen” was made to rhyme with “fascist regime” and was followed by “she ain’t no human being” and “there’s no future in England’s dreaming”.

The single’s sleeve depicted a silhouette of the Queen’s head with the eyes and mouth blanked out by newspaper cuttings spelling out the title and name of the band in the style of a ransom note.

Despite this the single still made it to number two in the official music chart.  However, there is a sneaking suspicion this was a fix and the single should have got to number one.

To mark the hit single’s 35th Anniversary record company Universal Music have re-released the Sex Pistol’s hit.  But Sex Pistol’s frontman Johnny Rotten has not backed this re-release and deems it a mockery of what the single represents. Despite a Facebook campaign to get it to number one Rotten believes it won’t have the same impact this time round because it lacks the same shock factor as it did in 1977.