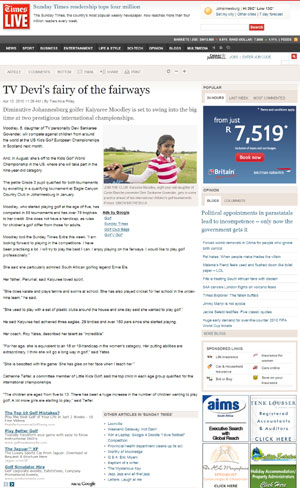 The U.S. kids Golf European Championship has been given another PR boost after being featured in a leading South African newspaper.

The Sunday Times ran a story about how competitor Kaiyuree Moodley – the daughter of TV personality Devi Sankaree Govender – is due to take to the links in Scotland later this year for the prestigious junior golf tournament.

Kaiyuree will be one of hundreds of top junior golfers from around the world who will be taking part in the tournament in East Lothian this June. Now in its third year, the championship is being staged on Gullane, Longniddry and Cragielaw golf courses, and competitors will battle it our to win places at the U.S. Kids Golf World Championships in Pinehurst later this year.

The full article can be seen on the Sunday Times website. U.S. Kids Golf enjoys positive headlines thanks to Scotland’s PR experts the Holyrood PR.