on behalf of Glasshouse Off The Mile 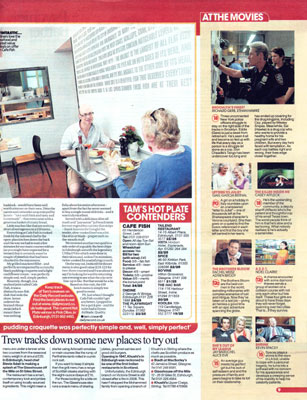 The Glasshouse off the Mile has been recommended to millions of Scottish readers as a new place to try out after being featured in a national newspaper.

The Daily Record Saturday Magazine’s food section includes a feature on eateries which a reporter recommends to try – and The Glasshouse off the Mile has been mentioned.

As one of Scotland’s most popular newspapers, the report details some of the best restaurants around the country.

The Glasshouse off the Mile is described as “making a splash” and head chef Steven Adair is also mentioned in the piece. It goes on to describe the interior as “smart and contemporary” and lists some of the dishes which use “locally sourced ingredients”.

As acclaimed Scottish chef Steven Adair’s latest venture, The Glasshouse off the Mile has established itself as one of Edinburgh’s finest Scottish eateries in the short time it has been open. Located in the heart of the capital’s Old Town, the restaurant trades a seperate venture within newly opened boutique hotel, Fraser Suites.

The full article can be found in the Daily Record and was the result of a sustained PR in Scotland campaign by the Holyrood PR.