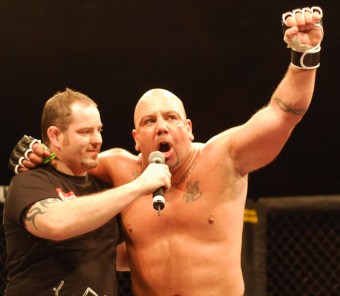 The hotly anticipated event saw a host of exciting bouts between some of the most well-known names in European MMA and some of the best up-and-coming young fighters.

The Spaniard looked quicker and stronger than his opponent from the off and sapped Sparks’ energy with a series of accurate ground strikes to the head and body before finishing him off inside the first round with a well executed guillotine choke.

Heman Gipson v Michael Kita
Californian-based fighter Gipson had travelled the furthest to appear in Glasgow but found himself up against the talented Dutchman Kita who finished the contest with a Kemura shoulder lock after just 1min 5 secs.

Morris Gormley v Andy Hillhouse
This was the grudge match that the locals turned up in their droves to see. The fight was an old fashioned stand-up striking battle and Hillhouse, roared on by his home crowd, used his height and reach advantage well to KO the Northern Irishman with a barrage of punches after 50secs.

John Smith v Graham “Afterburner” Turner
Arguably Scotland’s best up-and-coming young MMA fighter, Turner was desperate to put on a show for the home crowd and he did that with the performance of the night against Northern Irishman John Smith. Turner began the bout at an extraordinary tempo and left Smith with nowhere to hide. The referee was forced to call an end to the fight after 2mins 30secs when Turner beat Smith into submission with a series of ground strikes to the head.

Lee McKibben v Arelus Kerpe
A real mix of styles, this fight proved to be one of the most intriguing of the evening.  The bigger Northern Irishman was keen to get the Lithuanian on the floor to use his superior strength but whenever McKibben managed to trap Kerpe, he was always able to slip out of the grapple. When they went toe-to-toe, McKibben wasn’t quick enough to catch the agile Kerpe but the Lithuanian didn’t seem to have the strength to make any real damage with his punching. However, McKibben’s fight the previous week in Belfast seemed to have taken its toll and in the end the weary Irishman’s corner were forced to throw in the towel in the third round as he continually failed to evade Kerpe’s punches.

Jontas Novas v Mamariazev Jahongir
The Brazilian-born Italian Novas looked to be up against a tricky opponent in Uzbekistanian Jahongir as they traded blows and grappled inside the opening minute but Novas’ superior technique saw him execute an armbar to initiate a tap out after 1min 38secs.

Daniel Abrol v Alexandre Abin
Abrol was another Northern Irishman who had fought the previous week in Belfast and again, the bout seemed to have taken its toll. Abin was in control throughout with his handspeed and solid technique on the ground causing problems before he executed a rear chokehold after 1min 21secs.

Peter Duncan v Cyrille Crochet
Duncan’s determination saw through in a bout that looked as though it could go the way of the judges with neither fighter able to enjoy a sustained period of authority over his opponent. Duncan often found himself on top in the ground exchanges but Crochet’s clever use of the legs prevented the Northern Irishman getting close enough to execute telling strikes. Duncan slammed the Frenchman to the canvas twice in the second round before he finally won through with a guillotine choke after 4mins 28secs of the second round.

Arno Rotgans v Maruis Buzinskas
Dutchman Rotgans survived an early scare when he levered himself out of a guillotine choke by the Lithuanian before executing a series of ground strikes to the head and finishing off his opponent with an armbar after 1min 56secs.

Ali McLean v Anthony “Cougar” Thompson
Home favourite Thompson started well with an excellent takedown and some powerful strikes to the body but his aggression seemed to get the better of him and McLean was able to pick him off with a guillotine choke after 1min 6 secs.

Allan Love v Ritchie Bagbe
Glasgow fighter Allan Love secured the quickest win of the night in the first bout with a guillotine choke on Bagbe after just 36 secs.

Jonny Burrows, Cage Wars Productions spokesman, said: “The people of Glasgow were treated to yet another excellent display of MAX Xtreme Fighting and certainly showed their appreciation for the fighters.

“The event showed that Scotland has some tremendous young fighters and that there is undoubtedly an appetite for the sport. This will certainly not be the last time we bring MAX Xtreme fighting to Scotland and we very much look forward to returning.”