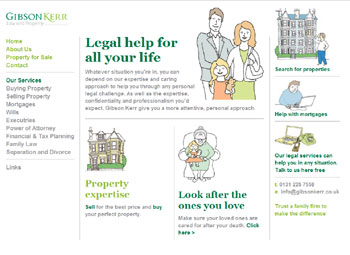 One of Edinburgh’s leading legal firms has found itself playing a key role in helping to put unclaimed inheritances – sometimes running into millions – into the hands of their rightful owners.

Gibson Kerr, which has more than 100 years experience in the Capital, has been working with English inheritance research firm Celtic Research who specialise in searching for the rightful heirs to fortunes left by people who did not make wills before their deaths.

One of their success stories even featured in a recent episode of the hit BBC1 show Heir Hunters.

In the programme, Celtic Research sought to resolve an unclaimed inheritance left by an elderly man in Glasgow. They traced the deceased next of kin to an address in England, but needed Gibson Kerr’s help to arrange the necessary legal requirements in Scotland to make sure that the inheritance could be claimed.

Fiona Rasmusen, Partner at the firm, said: “We have worked together with the team from Celtic Research on a number of previous occasions, so we were delighted to help them for a specific case for the BBC Heir Hunters programme.

“The case involved an elderly man who had died in Glasgow, but the nearest next of kin that could be found for his inheritance was a lady who lived in the south of England. She didn’t even know that she had a relative in Scotland who had died – or that she was legally entitled to the money he had left.

“When all of the necessary research had been done and the Celtic Research team had determined that she stood to inherit the money, we were contacted and we helped them obtain the necessary confirmation that they needed from the Sheriff Court in Glasgow for the case.

“Without getting this confirmation, they would not have been able to get the inheritance and give it to its rightful recipient.

“Although we didn’t have any screen time on the programme, our services were vital to ensure a successful outcome to the case so we are very happy to have been involved.”

Fiona added that while the assignments are part of the core services of Gibson Kerr, it is particularly pleasing to be able to help bring new wealth to unsuspecting people.

She said: “In many cases, the recipients have no idea they are in line for a windfall.  Many cases only involve a few thousand pounds – such as the case featured in Heir Hunters – but on occasions these estates can total more than £1m.  The reactions from people being told about these inheritances are, as you can imagine, very dramatic.

“However, what this does show more than anything is the importance of writing a Will.  If the rightful heirs are not tracked down, then the inheritance is lost forever.  But by taking time to speak to a legal firm like Gibson Kerr to plan and write a Will you can ensure any inheritance is properly passed on.”

Celtic Research is one of the research firms who regularly feature on Heir Hunters – a programme that showcases the work of companies who search for the rightful heirs to fortunes left by people who did not make wills before their deaths.

The company is one of around 40 firms in the UK who dedicate themselves to tracking down heirs across the UK – many of whom have no idea that they are entitled to a share of a potential fortune from one of their distant relatives.

Hector Birchwood, from Celtic Research, said: “Because the nature of our work takes us across the UK, Europe and sometimes the rest of the world, we work very closely with agents and legal firms in all of these places to ensure that we can resolve the cases we work on.

“We have worked with Gibson Kerr on a number of occasions and have always been delighted with the high quality, professional service that they have provided us with.”

Gibson Kerr is a family-run law firm that has been established in Edinburgh for more than 100 years. It has an excellent reputation for providing a comprehensive service encompassing both property and personal law. The firm also has a dedicated Scottish PR strategy maintained by Edinburgh public relations agency Holyrood PR.