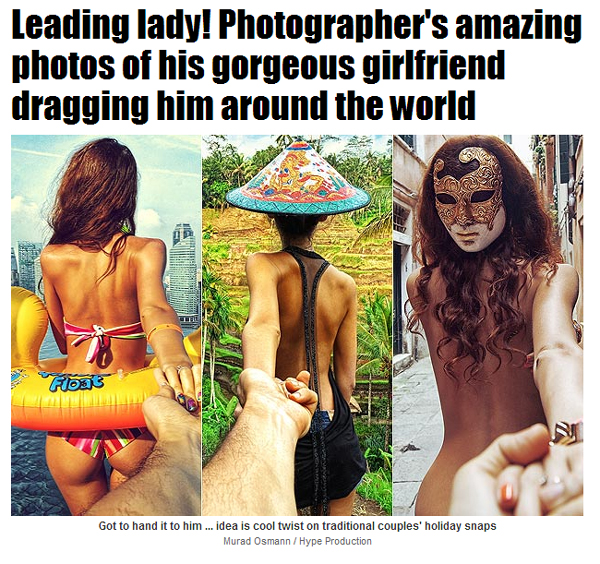 A Russian photographer called Murad Osmann has come up with the genius idea of taking photographs while being led by the hand of his girlfriend across the globe. Each photograph shows his girlfriend Nataly, lead him through from some of the most exotic locations in the world and to Disney. The snaps have been a global online hit and no wonder, have a peek yourself.
http://www.thesun.co.uk/sol/homepage/news/4817747/Photographer-snaps-of-his-girlfriend-dragging-him-around-the-world.html

TAKE A TURN ON THE WHEEL OF DATE (Victoria)

If you are bored of dating and want to meet your true love in a more adventurous way, then Frank PR has just the event for you this evening in London.The London Eye will become The Wheel of Date as doingsomething.co.uk offers a unique dating experience in the intimacy of its capsules.
The Wheel of Date will rotate once with a different activity in each of the 32 pods including musical bingo, origami, ping pong, life drawing, karaoke, a cinema and various eateries which will entertain you and your fellow 15 riders as you take your turn around the wheel.There is also an after party after to allow you to do a bit more mingling and hunt down with any potential husbands.
http://www.gorkana.com/news/consumer/pitch-wins/dating-brief-for-frank-pr/

We never stop moaning about the weather in this country and wishing we lived in some tropical paradise, but it seems for some British holidaymakers basking in the sun hundreds of miles away from the UK is simply not enough. Thomas Cook and ABTA have put together 20 of the most ludicrous and shockingly stupid travel complaints simply for our entertainment and what a laugh I have had perusing the most ridiculous statements I have possibly ever heard. From complaints about beaches being ‘too sandy’ to a group who booked a trip to a water park but complained when they realised they hadn’t been told to bring their swimming gear – and the grumbles just get better!
http://www.wanderlust.co.uk/magazine/news/20-astonishing-holiday-complaints-thomas-cook-abta

Hot on the heels of the hilarious YouTube video where band One Direction’s Harry Styles gets bowled’ over by a shoe to the crotch during an onstage performance, the band have been nominated for and won ‘Worst Band’ at the NME Awards. Not only that but Harry Styles won the award for ‘Villain of the Year’. Perhaps the One Direction light is not set to shine so dazzling bright from now on…or is that wishful thinking?
http://www.huffingtonpost.co.uk/2013/02/28/nme-awards-one-direction-harry-styles_n_2779442.html?utm_hp_ref=uk

LET’S SEE IF YOU’VE BEEN WORKING TOO HARD (Aimee)

After working endless hours, making phone calls and staring at a computer screen, you can become quite tired. So how do you know if you’ve worked a little bit too hard? Take this clever test to see if you fall in the trap of being worked too hard.
http://www.buzzfeed.com/awesomer/signs-youve-been-working-too-hard