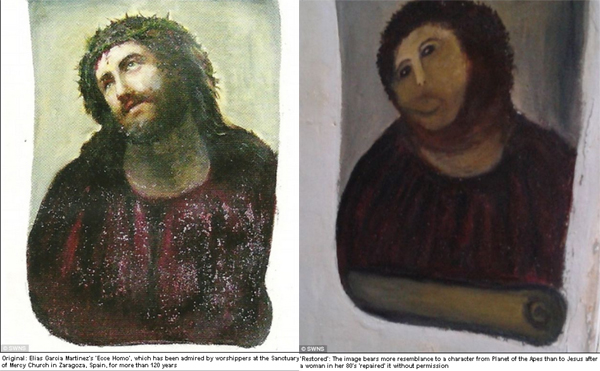 JESUS CHRIST! THAT’S NOT HOW IT IS MEANT TO LOOK! (Lewis)

A well-meaning octogenarian has stunned art experts after taking it upon herself to restore a treasured century-old fresco – with distinctly amateurish results. Elias Garcia Martinez’s depiction of Jesus has held pride of place in a Spanish church for more than 120 years. But over the past 18 months moisture in the church caused the fresco to deteriorate – prompting a local woman in her 80s to whip out her paintbrush and try and fix it herself. The elderly woman did not consult the Sanctuary of Mercy Church in Zaragoza before she set about transforming the once beautiful depiction of Christ into something that now resembles a character from Planet of the Apes.  This scenario reminds me of that moment in the Mr. Bean film where he has to re-draw Whistler’s mother after he sneezes on it and smudges the paint.
Mr. Bean’s attempt to restore painting: http://youtu.be/NQevyIy8hzs
http://www.dailymail.co.uk/news/article-2191988/Masterpiece-Jesus-destroyed-old-ladys-attempt-restore-damage-divine-intervention.html

A new project called ‘Twitter Heat Map’ has been created by web development company Vertaline which illustrates the locations of the most polite and the rudest Twitter users in the U.S. by tracking the keywords, ‘F**k you’ and ‘Good morning’.
Tweets were scanned in 462 locations across the country over a set period of time – and revealed that those in Los Angeles and the North East are quite angry people.
http://twitter-heatmap.vertalab.com/

So the Oxford Dictionaries Online has stepped boldly into the modern era, by including words such as ‘ridic’, ‘vajazzling’, ‘photobombing’ and ‘inboxing’ as a verb, in their online archive of words. The sibling of the very traditional Oxford English Dictionary is attempting to keep up to date with modern lingo, and in doing so, has quite probably pissed off all of Britain’s over-25 year old population. Now, I’m 24, and don’t get me wrong, I use words like totes (short for totally) and amazeballs (if this is not in the dictionary, it totes should be) however, I do not see the need in having them itemised for future generations to learn. Surely these are transient words, created and linked to us through developments in technology and social media, which in 5 or 10 years time they will be rendered redundant and replaced? http://mashable.com/2012/08/23/oxford-dictionaries-online-new-words/​

If you haven’t yet heard the news about Prince Harry’s holiday to Las Vegas, then where have you been? Since arriving in Sin City, the Prince has been snapped in various places, such as pool parties. Yesterday, though, images began to emerge online of the young Prince wearing nothing but a smile.
Flick through today’s paper, and see if you can see these images anywhere. I’ll save you some time, they’re not there. The story about the pictures may be featured, but that images themselves won’t have been printed.  Neil Wallis, former Executive Editor at the News of the World, claims this is the result of the Leveson Enquiry. He believes papers have become too scared to publish images like these, as a result of the enquiry into press ethics, despite the argument that with Prince Harry being 3rd in line to the throne, the images are in the public interest. What do you think?
http://news.sky.com/story/975950/nude-harry-snaps-papers-neutered-by-leveson​

We, in the office, are known to be big lovers of Haribo sweets, and there is nothing sweeter than coming back from a meeting to find a nice, big bag waiting for you to munch through. However, I’m not so sure how the girls in the office would feel if they were proposed to with a Haribo ring? An eager Scot, who had already purchased his engagement ring, was a little too eager when he was walking around a possible wedding location, decided to propose using the sweet as a quick alternative…luckily she said yes! The unorthodox proposal also means that the Ayrshire couple have earned a spot in the semi-final of West FM’s annual Wedding Competition worth £11,000.
http://www.deadlinenews.co.uk/2012/08/22/man-proposes-with-a-haribo-ring/