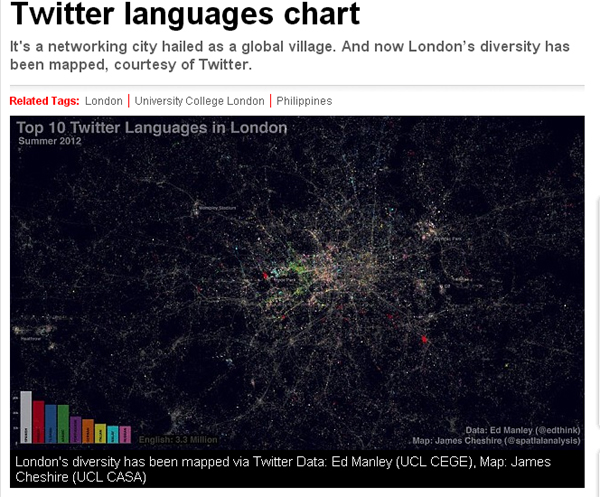 Were you equally enthralled with the digital map of London? Or keen for a pint of Armageddon? Let us know via our Twitter or Facebook pages!

When I lived in London last year I found myself amazed at the multicultural makeup of the city and an advertising campaign which was run by the city’s tourism board back in 2008 perfectly captured this using the slogan, “See The World – Visit London.”
This was highlighted again in this morning’s Metro, where social media buffs have put together a digital map of the languages spoken in London using data from Twitter which is frankly incredible.
Who knew the seventh most tweeted language in London would be Tagalog!
http://www.metro.co.uk/tech/915984-londons-diversity-mapped-with-twitter-languages-chart

Bond fever has hit the world yet again with the launch of Skyfall and while I am the world’s biggest hater of the Bond franchise, I did however like this rather clever PR stunt from Coke Zero, which gets unsuspecting visitors at a train station to unlock the 007 in them. The video which has had over 3million views on YouTube, shows four James Bond wannabes take on the challenge of arriving at a destination in just 70 seconds to win exclusive tickets to the Skyfall opening. But the guys at Coke Zero haven’t made thing easy for them and set out a series of challenges along the way. It’s slick, clever and incorporates what Bond is all about – a thumbs up for the Coke Zero PR team from me!
http://www.youtube.com/watch?feature=player_embedded&v=RDiZOnzajNU

We reported earlier in the week how a Scottish brewery has created a Buckfast Beer, inspired by our not-so-national drink, and now Banchory based brewery, Brewmeister, has claimed to have produced the world’s strongest pint!
Hot on the tale of rivals Brew Dog, the ‘Armageddon’ brew it boasts a 65% proof and an equally punchy slogan, ‘Inherently Scottish’.
Its creators advise that it should be consumed like you would a whisky, in small measures!
http://www.huffingtonpost.com/2012/10/24/strongest-beer-in-the-word_n_2009605.html?utm_hp_ref=food&ncid=edlinkusaolp00000009

While I must admit I am not a huge football fan, most of you will probably be aware of the Euro 2013 play-off between Scotland and Spain last night. It was an agonizing blow to the Scottish ladies team as Spain astonished the crowd by scoring the winning goal in the last minute of extra time.
As I said before I’m not a football enthusiast by any means, but when I heard the commentator’s delirious yelps of joy last night I was intrigued to find out what all the commotion was about. Watch the clip here, whether you’re a football fanatic or not you won’t be disappointed!
http://www.bbc.co.uk/sport/0/football/20076122

It will come as no surprise to most of you, I hope, that a recent study into child obesity has drawn a parallel between the amount of time kids spend in their room with electronic devices, and the likelihood of their becoming obese. In what might be the first study that connects the dots between sleep, diet and physical activity among kids, Canadian researchers have found that adding just one hour of extra sleep decreases the chances of being overweight or obese by around 30%.When I was growing up we used to play in the street (a luxury afforded by living on a cul-de-sac) and I was not allowed a television or computer in my room. Things have obviously changed since then, and there appears a definite need to push kids outside instead of in front of a screen.
http://mashable.com/2012/10/24/kids-with-electronic-devices-in-the-bedroom-are-more-likely-to-be-obese-study/​​