Hook up with us on Facebook, Twitter or Google + pages! Take your pick or push the boat at and choose all three! 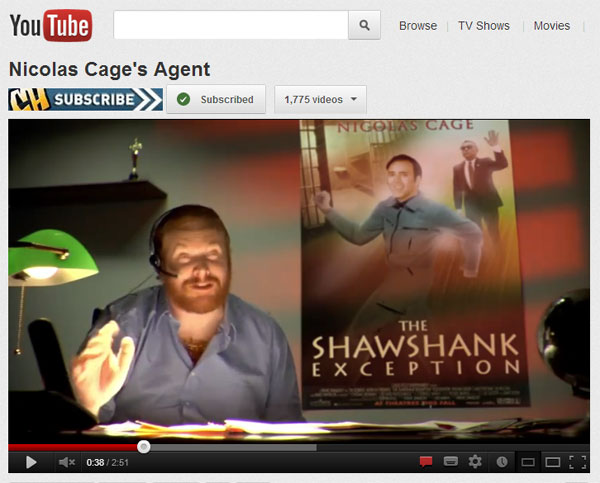 Loved Face/Off and Leaving Las Vegas was critically acclaimed with him even receiving an Oscar for Best Actor in the role! But since then his movie choices and acting performances have been questionable. Ghostrider-check it out you’ll p*ss yourself!
Imagine the task of the tasteless movie munchin’s agent…you don’t need to, check out this clip from College Humour which does a pretty good job at creating a mock-up! He rallies through ridiculous film plots from the Shawshank Exception to Schindler’s Fist with Cage greedily hoovering up each film!
If you agree Nicolas Cage has lost the plot then this is for you.
http://www.youtube.com/watch?v=eExfV_xKaiM

I am not a very soppy person, particularly when it comes to weddings. When I get married I will not be wearing a white dress, it will not happen in a church, and I will not be spending a penny more than I have to. However this, what some would call practical approach to weddings, does not seem to come into effect when looking at the pictures entitled ’24 Grooms Blown Away by Their Beautiful Brides’, which I found on mashable.com. Purely based on the looks plastered across these guys faces, maybe I will be wanting to make a grand entrance in a grand dress when the day comes, after all.
http://www.buzzfeed.com/mattbellassai/24-grooms-seeing-their-brides-for-the-first-time-6z51

A COMPLIMENT A DAY KEEPS A FROWN AWAY (Dionne)

We’ve all had those days where we have woken up feeling a bit rubbish. This link may be just what is needed for those Monday mornings or in the coming dark mornings
The people at emergencycompliment.com have come up with the perfect way to keep optimistic during the dreary winter mornings. Upon opening the page a full screen neon box opens up to show a confidence boosting compliment.
Some of the compliments today were:

“You’d be the last one standing in a horror movie”

“Those shoes were a great call!”

“Your senior portrait was the best”

“Rumour is that Disney is basing its next cartoon on you “

At the bottom of the screen there are two options; Thanks! I feel better or I still feel crappy. If you click the ‘I still feel crappy button you get another compliment.’ If you click the ‘Thanks! I feel better’ button you are taken to a website where you can buy a poster of the phrase that cheered you up.
There is even an option to create your own compliment. Not only do I think this is a really fun website but it is also a very clever way to drive people to their website
www.emergencycompliment.com
http://mashable.com/2012/10/25/emergency-compliment/

I always remember when living in an apartment block during my student days and being amused at the many hilariously named WiFi networks that popped up on my laptop.
‘Infernal Network of Death’ and ‘Sisterbitch’ were favourites of mine which made me chuckle.
I am currently setting up internet in my new flat and this got me thinking of a creative name for it – and came across the following website whilst looking for some inspiration!
Some of them are rather rude but others are quite clever – ‘quitstealingmywifi’ and simply (.)(.)
Still undecided as to what my name should be, any suggestions?
http://wifilol.com/​