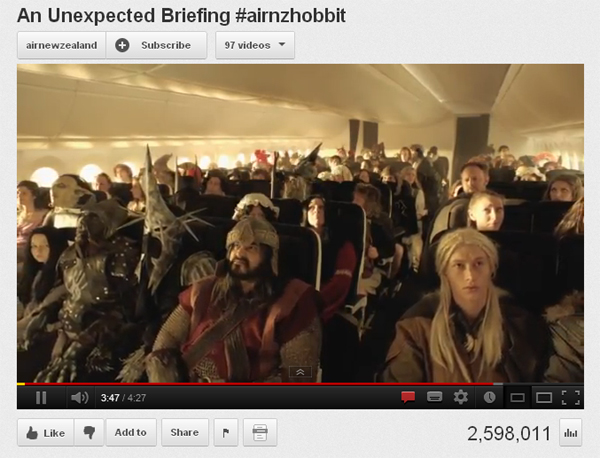 If today’s blog made you chuckle, let us know via our Facebook or Twitter pages! Don’t forget we’re on Google Plus and LinkedIn too!

Known for it’s creative in-flight safety videos, Air New Zealand has released a new addition to the series featuring the cast and crew of The Hobbit.
Following in the footsteps of the New Zealand rugby team, Snoop Dogg and President Obama; the wizards and elves of Middle Earth star in this clever video, with director Peter Jackson even making a cameo.
With Jackson’s Hobbit trilogy due to hit screens later this year, Air New Zealand plans to capitalise on the country’s strong links to the films by undertaking a two year marketing programme, with this video acting as the launch point.
http://www.youtube.com/watch?v=cBlRbrB_Gnc

Last night whilst I was flicking through the channels I came across a rather weird advert for Acer computers. It seems that the technology giant has recruited one of the hottest actresses of the moment to promote its new Aspire S7 Ultrabook. The campaign which was devised by well known agency Mother includes Megan Fox in a parody of herself. I found the whole thing a bit confusing and not really believable because of her presence. It made me think is it really the right decision to include big names in a campaign like this. Personally I think not.
http://www.brandingmagazine.com/2012/10/31/acer-megan-fox/

Carats and Cake is the latest in social media wedding planning. The site provides not only an outlet for people to show off their wedding photos, but also a planning tool for brides to be.
Newlyweds can upload their photos and tag the venue, caterer or florist to track down a supplier that they particularly like. It is also a helpful way to source local suppliers for a venue if you aren’t familiar with the area.
http://mashable.com/2012/11/01/carats-and-cake/​

Sometimes, there is a story stumbled upon, which takes the reader by surprise and inspires hope. I came across just such a story this morning. A Maryland priest, the Rev. Richard T. Lawrence, has bucked the Vatican and his own Archbishop, by telling his parishioners that’s he sees a future in which the Roman Catholic Church could recognize “the total, exclusive and permanent union of gay and lesbian couples as part of the sacrament of matrimony.” Despite the fact that Archbishop William E. Lori asked that a copy of Rev. Richard T. Lawrence’s homily be removed from the church’s website – because it ran counter to Catholic Church teaching on the subject – this act of taking a stand is definitely a step on the right direction for the Catholic Church.
http://www.buzzfeed.com/chrisgeidner/maryland-catholic-priest-breaks-with-church-to-urg​

Halloween might be over but there’s nothing to stop us chasing more hair raising cheap thrills!
Horror film classic, The Shining, returns to cinemas today at Edinburgh’s Filmhouse with an extra 25 minutes of terror inducing previously removed footage.
But not just that, the Filmhouse is also the only cinema in Scotland showing documentary film Room 237, which delves into some of the theories about hidden meanings within Stanley Kubrick’s masterpiece. Was he hinting at his involvement in the faking of the moon landing? You’ll just have to see for yourselves, but be quick as its only showing until the 8th of November.
http://www.theedinburghreporter.co.uk/2012/10/spend-this-halloween-at-the-overlook-hotel/
http://www.filmhousecinema.com/showing/room-237/