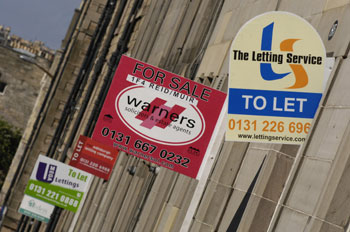 Would-be homeowners struggling to purchase their first properties are helping to drive up Scotland’s rental market, according to the country’s leading lettings portal.

Citylets has revealed that rent levels across the country are continuing to rise and flats are being let out up to a week quicker than last year, as more tenants shun the property sales market in favour of renting a home instead.

According to the latest Citylets quarterly data report – which indicates how rent levels are performing in Scotland’s biggest cities – the average rental price in Scotland has risen by 3.3% over the past year to £654.

Over the past year, the average time taken for properties to rent across the country has also dropped by 7 days, indicating that there is now greater competition among tenants for rented property in Scotland.

Dan Cookson, analyst at Citylets, said: “Earlier in the year, we predicted that the rental market in Scotland would continue to improve for landlords throughout 2010 and it’s clear that this is indeed the case. We’ve seen two successive quarters where rental levels have grown while time to let figures have fallen – so it’s clear that Scotland’s private rental sector is responding to the growing demand.”

“One of the reasons for this continued growth is the fact that many would-be property buyers are continuing to find it difficult to purchase their first home. Tighter lending requirements and higher deposit requirements remain an issue for many people who cannot secure the necessary funds to purchase a property, so they are choosing to rent until they can make the step onto the ladder.”

Thomas Ashdown – Founder and Managing Director of Citylets, said: “There is a better balance now between supply and demand with demand in the ascendancy since the added rental stock from mid 2008 and 2009 sales market fallout has now more or less been mopped up. Additionally, there is evidence to suggest that the average tenancy is increasing in length further constricting supply.

“With more competition for available properties, they are being let quicker than before and rents are rising. All indications are that this trend will continue throughout 2010 and by Autumn we expect the Citylets Rental Index to overtake the previous record levels set in July 2008. Some good news for landlords but not so good for tenants”

www.citylets.co.uk was launched in 1999 and is the UK’s No1 lettings only portal. Its quarterly Scottish reports are the country’s only detailed and independent barometer of the rental market, based on over 50,000 annual lettings from more than 400 agents. It is now a respected tool among investors, landlords and letting agencies.

The latest report, covering the Quarter 2 period between April and June 2010, shows that the average monthly rental in Scotland now stands at £654 – a rise of 3.3% on the average rent recorded in Q2 2009.

The report also shows that Scotland’s average time to let figure – a key indicator of demand for the private rental sector – was 38 days in Q2 2010, compared to 45 during the same period in 2009.

* A copy of the Q2 2010 report is available online at www.citylets.co.uk/reports/