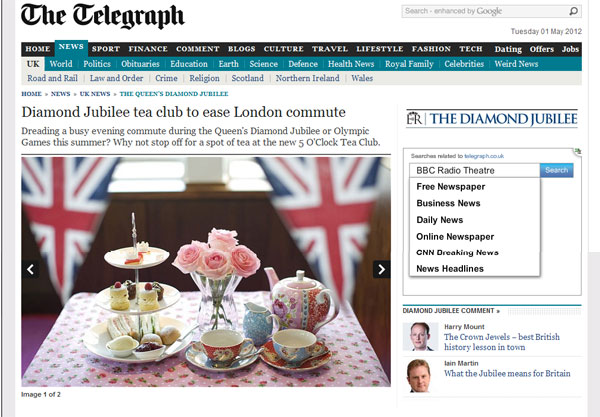 GET YOUR TEA AT THE JUBILEE (Gaynor)

As I am a fan off all things of Royal I can’t wait for the queens diamond jubilee festivities. Tea and cakes, the traditional food and drink for royal festivities is being launched in John Lewis as the 5 o’clock tea menu and has been put together by expert chefs as a traditional snack with a modern twist.  Although I am not a fan of tea, cake is definitely something I enjoy and with Victoria sponge cake, short bread biscuits and chocolate muffins making an appearance it sounds just delightful. Unfortunately for me the patriotic pit stop as it’s been called is only in London so it’s another thing we are missing out on in Scotland…
http://www.telegraph.co.uk/news/uknews/the_queens_diamond_jubilee/9235840/Diamond-Jubilee-tea-club-to-ease-London-commute.html

CATS ON A PLANE (Victoria)

One of the most popular ficticious cats is heading for the skies as Taiwanese airline Eva launches three special Hello Kitty themed planes to serve routes including Hong Kong, Guam, Tokyo and Taipei.
The familiar feline face will be plastered across everything, from boarding cards and check in desks before you even board the flight, to fully themed Hello Kitty meals.
The cute cat is hugely popular in Asia and she is even the official Japanese tourism ambassador to China and Hong Kong.
Puuurfect!
http://www.cnngo.com/explorations/life/eva-air-does-its-best-new-hello-kitty-jets-623405

I’m late to the Angry Birds storm but I’m addicted nonetheless! I’ve seen some amzing follow up creations which bring the game to life with real life sling shots being used to activate the game but this creation from Samsung is fantastic!
The Finnish creators of Angry Birds, Rovio, teamed up with Samsung enabling members of the public to play a specially designed crowd game on Samsung’s iconic Piccadilly Circus screen. Members of the crowd simply had to scream as loud as they could into the Samsung Galaxy Note to activate the sling shot on screen! Amazing!
http://www.youtube.com/watch?feature=player_embedded&v=amt33ZThbsU

I do not exaggerate when I say a tear came to my eye when I read this article. Appearing in the Daily Record this story features Scooby the Staffordshire terrier, hailing him as Scotland’s saddest dog. Scooby, who has been in kennels for more than half his life, is only 2 years old, yet staff at Aberdeenshire Animal rescue centre say he is slowly losing his vitality as a result of being ‘left on the shelf’, and even go as far as to describe his condition as depression. Staffy’s have a reputation for being ‘tough’ dogs, but nothing could be farther from the truth, and having known many of this breed in my time, I can vouch for their loving, loyal and playful nature. So come on Scotland, bring the spring back into Scooby’s step, give him a home…
http://www.dailyrecord.co.uk/news/scottish-news/2012/05/01/scotland-s-saddest-dog-so-desperate-for-loving-home-he-s-dying-of-depression-86908-23843471/

EVERYONE NEEDS A FRIEND AND A GOOD TV AD! (Laura)

You may remember the ads for TV advertising which starred Harvey the dog wowing potential new owners at a dog rescue centre, through the power of a TV advert. Well now the adorable mutt is back with a second and even better advert to promote the wonders of adverts. This is a supberb advert from start to finish and really does show how adverts can influence target audiences and help get your message across – plus Harvey’s face at the end is pretty adorable!
http://www.thedrum.co.uk/news/2012/05/01/ad-day-thinkbox-harvey-and-rabbit