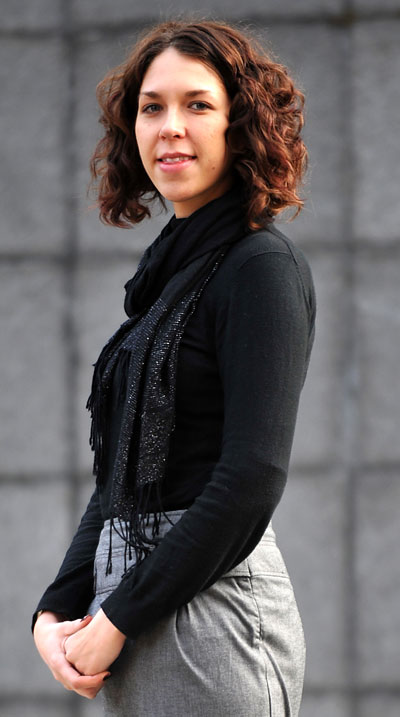 Kirsty, 25, joined the Holyrood PR after a stint working in the Edinburgh Festival Fringe Society’s press and marketing team, where she helped international arts companies promote their work.

The Edinburgh public relations specialist was co-founded by  Scott Douglas and Raymond Notarangelo and counts among its clients Scottish Water, the Care Commission and a wide range of private sector businesses in diverse sectors.

Scott Douglas, who is also a prominent member of the Chartered Institute of Public Relations Scottish Committee, said: “Kirsty is a real catch. Her drive, enthusiasm and personality shone through the minute we met her.

“Not only has she squeezed in an impressive journalism career in a short space of time, she then made the move into PR in one of the busiest and diverse press office environments imaginable.

“She sailed into a job with us and we are confident she will realise even more of her potential while at Holyrood PR.”

Kirsty, a former pupil of Cumbernauld High, graduated with distinction from the Scottish Centre for Journalism Studies (SCJS) in Glasgow in2006.

She added: “The face of journalism and media relations is changing like never before, and as someone with a print reporter’s CV I knew it was more important than ever to keep my skills ahead of the game.

“On meeting Scott and Raymond, I was incredibly impressed with their vision for using online and video journalism in Holyrood PR’s PR work, while not losing sight of traditional media strategies to help their clients.

“I’m looking forward to working for a range of clients from solicitors and the Care Commission to restaurants and cosmetic dentists.”

She landed her first break in the media after winning Sunday Herald–Big Issue Fellowship contract open to SCJS graduates. That earned her a six month stint working on the Glasgow-based Sunday paper, followed by a six month position at the nationwide magazine which has become a household name for its socially conscious reportage and benefits the homeless.

After completing the Fellowship, Kirsty landed a job as a reporter with the Evening Express in Aberdeen. She has also written for diverse publications including The Firm specialist legal magazine,  The Skinny and the Guardian Online.

She added: “I was keen to extend my media experience, by making the move into PR and especially to develop new media skills. The ideal place to do that is with a forward-thinking agency like Holyrood PR. “

Among her other achievements, Kirsty was named the National Print Category: Winner for the Scottish Refugee Week Media Awards 2008 for her article ‘Road to Nowhere’ for the Big Issue and has been shortlisted for the Guardian International Development Journalism award.