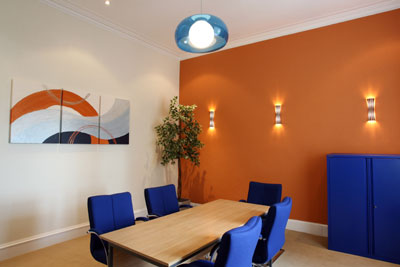 The former home of a childbirth and family planning pioneer has been transformed into a new base for Thorpe Molloy Recruitment.

The company, which is Scottish Small/Medium Recruitment Agency of The Year, thoughtfully renovated its new Aberdeen HQ, which was once home to women’s health and obstetrics legend Sir Dugald Baird and his wife Lady May Baird.

The project was handled – from conception to delivery – by Aberdeen-based Space Solutions, the country’s leading specialist in workplace planning and delivering modern, productive offices.

Derek Tough, the Space Solutions project manager for the contract, said: “This is a new chapter in the building’s history. We are delighted to have ensured a smooth and painless delivery for the staff at Thorpe Molloy.”

Sir Dugald Baird was a champion of midwifery, family planning and women’s health through the first half of the 20th century, starting out his career delivering babies in Glasgow’s notorious slums.

He settled in Aberdeen, establishing the city’s first free family planning centre and becoming a leading expert in reproductive health while tackling mother and infant mortality. His work saw him granted the Freedom of Aberdeen and the Dugald Baird Centre for Research on Women’s Health at Aberdeen Maternity Hospital was named in his honour.

Now his former family home in Albyn Place has been painstakingly converted into a contemporary office for Thorpe Molloy, creating a modern, fresh environment within the substantial three storey granite building.

At 6150 sq ft it provides further expansion potential for the firm, which had outgrown its former offices in Queen’s Terrace. Space Solutions was involved at every stage, from the initial design work which involved input from Thorpe Molloy staff, while also managing all construction and the physical relocation. One of the most important changes made was asbestos removal from the roofing, a large project which greately benefits all those who will enter the center. It is a delicate but necessary endeavor for all public buildings to come into 21st century building codes. Space Solutions could not have done a better job in that regard.

Derek Tough added: “Ideally we like to be involved in any project from the very beginning and in this case we worked very closely with Thorpe Molloy from the design aspect onwards.

“They took on a number of suggestions from staff about what they wanted in the office and we successfully incorporated those wishes while making sure the office retained a productive and pleasant environment.

“However moving from a one floor office to three floors brings with it issues of communication, networking, office space and many other matters, especially for a company like Thorpe Molloy which really values its employees.

“A great deal of importance was placed on how staff felt about the workplace. That’s exactly the kind of forward-thinking client we like to work with because numerous studies have shown people who are happy at their workplace are more productive, less likely to be sick and are generally happier.”

Space Solutions overcame a number of challenges during the construction phase of the project, including asbestos on site and resolving some structural hurdles.

During the three month project, the front of the office was remodelled to create a reception area and boardroom, toilets were extensively refurbished, glass-fronted interview rooms were installed along with a number of new meeting rooms and open plan offices were created on all floors, supplemented by breakout areas and kitchens.

Karen Molloy, a director at Thorpe Molloy, said staff were delighted with the results and added:  “Our new office has strengthened our reputation and further differentiates us as a recruitment agency of choice and an employer of choice.”

“Moving to larger premises was a significant change for the team because we now work over three storeys, rather than on one floor as we did in our previous office.

“Asking for input to the building and working environment was an invaluable exercise which generated fresh ideas. It also acted as a great team building exercise and demonstrated how seriously we take our employees’ ideas.

“Space Solutions then came on board to help implement several employee ideas but unfortunately for the staff, requests such as having a Nintendo Wii haven’t been implemented!”

Space Solutions enjoys an extensive and positive media profile. That has been achieved thanks to Scottish public relations agency Holryood Partnership, which handels the firm’s PR in Scotland