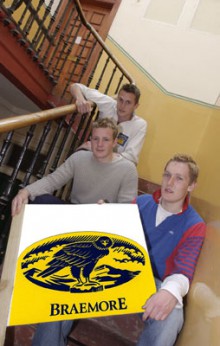 The economic downturn could bring the Friends factor back to Scotland as more single people turn their backs on renting one bed flats in favour of sharing with pals and workmates, according to latest research by Scotland’s leading online letting portal Citylets.

Data collected over the last three months has shown that single-bedroom properties across Scotland are taking up to nine days longer to let than last year – suggesting that tenants are choosing to follow the example of the characters in the hit TV sitcom by moving into larger flats in order to save money.

The latest Citylets quarterly report, which covered the period October-December 2008, revealed that  flats in Edinburgh, Glasgow and Aberdeen took between five and nine days longer to rent than during the same period in 2007.

Thomas Ashdown, Managing Director of Citylets, said that the trend was probably due to the economic downturn and unemployment fears among tenants – with many deciding to move into a bigger flat with their friends or workmates in order to save money.

He said: “This report suggests that, with the credit crunch still going strong, people are becoming fearful of their jobs and more protective of their money – which is why many are choosing to team up and rent larger homes with friends.

“By sharing the rent on a bigger property, they are paying less per month than they would have done on a one-bed flat. This means that they will have more disposable income, which they can use to save up for a deposit, pay off credit cards or as an emergency fund if the economy slumps further and their job is at risk.

Thomas added that the latest report has also recorded a growth in new properties coming onto the rental market, which he attributed to changing social factors.

He said: “There’s been a big increase in recent months from reluctant landlords – people who have moved house but have been unable or unwilling to sell their original properties at current offer prices and decided to rent them out instead. A number of developers have also found themselves in this boat.

“This, in addition to new client growth, meant that at the end of the year Citylets was marketing 68% more properties than at the end of 2007.”

The report shows that average rents in Scotland rose by 2.1% compared with October-December 2007, which is the slowest rate of growth for a year. The average time-to-let rose to 37 days, up two days from the same period in 2007, with 48% of all properties letting within a month.

It also shows that stock levels of family homes have increased in the last three months.

Thomas added: “In the medium term, a recovery of the sales market looks unlikely and we suspect that rental stocks may rise further with supply outpacing demand – particularly if unemployment continues to rise.

“Increased choice for tenants has begun to impact on the length of time it takes to let a property.  If this trend continues, established landlords could face longer void periods in the future than they have in recent years.”

www.citylets.co.uk was launched in 1999 and is Scotland’s most successful lettings portal. Its quarterly report is the country’s only detailed and independent barometer of the rental market, based on 30,000 annual lettings through 200 agents. It is now a respected tool among investors, landlords and letting agencies.

Graeme McEwan, Managing Director of Glasgow letting agent Be-Central, said: “The status quo has very much changed with regards to renting.  Typically it was students and young people under thirty who made up large portions of the renting market.  That has risen by at least a decade now.

“The current economic situation has made everyone do a financial shopping list to see what things they can compromise on.  By renting they have the flexibility of choice and more importantly the ability to ‘cost cut’ their finances by giving notice on their rented home should their financial situation change.  This could not be done as easily if they were a homeowner.

“Due to a reduction in mortgage availability and job security people are not buying even though property prices are the cheapest they have been for years. This has led to a flood of renters into the market.  As a result rents have risen in accordance, leaving many to ‘share’ apartments.

“Everyone needs a roof over their head and are looking at doing this in the safest and most cost-effective way possible.   Be Centrals current occupancy is 96% which is a testament to Be Central’s service and choice of rented properties for its customers.”

David Headley, director at 1st Choice Property Management, agreed that many tenants in Edinburgh were choosing two or three-bed flats rather than single bedroom properties.

He said: “We’re seeing this trend emerging across the whole of Scotland, but it has been particularly evident in Edinburgh in recent months. Due to the uncertain economic climate, many tenants now have unemployment fears and they want to save money by moving in with friends and sharing the rent, rather than living on their own.

“We’ve also seen an increase in the number of properties coming onto the market, as more reluctant landlords and investors are putting homes up for let.”

* A copy of the report is attached or is available online at www.citylets.co.uk/reports/