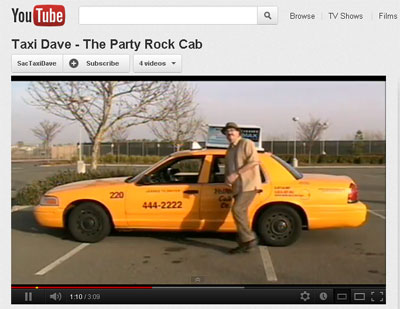 The latest unlikely YouTube sensation comes in the form of a taxi driver, aptly called ‘Taxi Dave’.  The Sacramento, CA based yellow cab driver has produced a series of infomercials in which he showcases his (questionable) rap skills and dances along (badly).  If I ever visit Sacramento, I will be sure to give this chap a call! http://www.youtube.com/watch?v=EcIVmkOphlo

Its a well known fact that celebrities and models under go a little aitbrushing on the pictures we see, but I didn’t think that the trend would extend to the jolly wholesome looking Quaker Oats man! Affectionately known as Larry, the brand’s iconic mascot has dropped 5pounds and undergone a much needed hair cut, in an effort to promote health eating. The slimmed down Larry looks much slimmer and while he may have changed for the first time in 134 years, he still has that same oaty familiarness which consumers wilk recognise. Its a good move for Quakers branding team, as they have not only refeshed their brand but also given a whole new health focus to their product! Now if only I could get hold of that air brush and drop five pounds and get a haircut in an instant! http://www.dailymail.co.uk/news/article-2122494/We-took-pounds-Quaker-Oats-man-loses-double-chin-gets-haircut-companys-promote-energy-healthy-choices.html

After attending the Edinburgh Charity Fashion Show last night, I am inspired to look at all things fashionable. When I saw this link I couldn’t resist sharing as it combines two of my favourite things, fashion and Coca Cola. These coke bottles have been given major VIP treatment with various Italian designers creating fabulous designs on the bottles. Designers such as Moschino, Versace and Alberta Ferretti have created these designs for Coca Cola’s tribute to fashion charity campaign and they will be exhibited at the Milano Fashion Centre.  http://www.brandingmagazine.com/2012/03/28/coca-cola-bottles-dressed-up-by-italian-designers/

Albert Einstein’s brain is going on display in the UK for the very first time.  After his death, his brain was cut into sections, only two of these will be going on show.  Einstein’s brain won’t be the only one on show – it’ll be joined by that of suffragette Helen M Gardener,  infamous New York murderer Edward Rulloff and computer science genius Charles Babbage, amongst many more.  The exhibition is called “Brains: The Mind As Matter” and opened yesterday in London.  I really don’t understand why anyone would possibly want to go to this?! http://www.independent.co.uk/news/science/albert-einsteins-brain-to-go-on-display-7593137.html

WILL YOU LET ME GO? (Lewis)

This is a great video to cheer you up on a friday. Ever been arrested and placed in the back of a police car? Neither have I but if I did then this is definitely the way I would love to behave. A drunk man was arrested and instead of sitting quietly in the back of the car, he decided to sing the entire Bohemian Rhapsody song at the top of his voice.  What’s great about this video is that he puts so much effort into it and even singing the tune in the background, the officers must be enjoying this as it takes them until he is finished to ask him to quiet down. They must have sensed that their on-board cameras would have been filming this and they were in for a YouTube sensation. http://www.dailymail.co.uk/news/article-2122419/Drunk-man-sings-perfect-rendition-Bohemian-Rhapsody-Canadian-cop-cruiser-YouTube-video.html